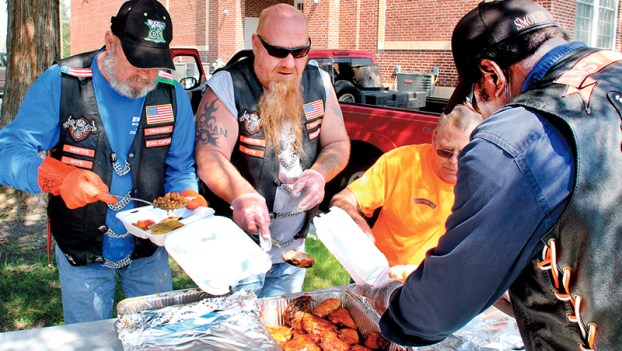 Members of the Lost Riders Motorcycle Club prepare lunch plates they cooked and served on March 28 to residents and staff at Woodland-Olney Apartments. Staff Photo by Cal Bryant

Not ‘Lost’ on effort

WOODLAND – Faced with an order from the governor that prohibits a function attended by more than 10 individuals due to the COVID-19 outbreak, members of the Lost Riders Motorcycle Club had to come up with an alternative plan.

The local group, based out of Conway and famous for refurbishing used electric wheelchairs and donating them to those with medical needs, had planned to host their annual fundraiser on April 3 to benefit Pine Forest Rest Home. They had planned this event months in advance; pre-ordered the food and scheduled club personnel and volunteers to cook and serve the meal.

Little did they know months ago that a deadly virus would find its way from foreign soil to the United States….leaving multitudes severely ill and thousands losing their lives. The virus even impacted the benefactor of this annual fundraiser. 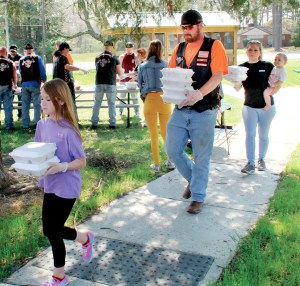 One club member is joined by two volunteers as they walk towards the entrance to the apartments to deliver the plates. Staff Photo by Cal Bryant

The Lost Riders opted to prepare a portion of the food they ordered for the Pine Forest fundraiser. They fired-up their grills at the clubhouse, filling each with chicken thighs and pork chops along with a big pot of baked beans and two pans of bacon-smothered cabbage and potatoes (a recipe from club president Johnnie “Red” Davis).

Shortly before high noon on Saturday, March 28, club members loaded the back of Shaky Ray Allen’s pick-up truck with the lip-smacking meal; hopped on their bikes and made their way to the Woodland-Olney Apartments to feed the residents and staff there.

“We had already bought the food, so we decided not to let it go to waste. We cooked it here [the Lost Riders’ clubhouse]; wrapped it all up and took it to Woodland to serve,” said Davis.

Approximately 90 plates were served as the club planned to feed anyone who showed up at their location on Saturday.

“We put out the word in advance that we would be fixing plates in Woodland starting around 12 noon. We knew they wouldn’t last very long,” Davis added.

“We were also going to deliver plates to all the residents and staff at Pine Forest before we found out that someone else had taken care of feeding them all week,” chimed in Roger Byrum, who serves the club as its Road Captain.

“They are our main focus every year,” Byrum continued about the annual assistance that the club provides to Pine Forest. “We give them every penny of profit we make off our meals. We’re still going to have a fundraiser for Pine Forest, but we’ll have to do it later this year after this virus stuff blows over.”

Byrum said the Lost Riders club has been in existence for about five years.

“We’re a family oriented club; we hold a lot of family functions and do a lot for our local community,” he stated.

One of those community-oriented programs is the wheelchairs they provide. To date, the group has donated over 150 refurbished wheelchairs (electric and manual) and walkers.

“We’ve been doing so many wheelchair donations now that people will call us and tell us they have one they would like to donate,” Byrum noted. “We’ll go by and pick it up. If it’s in good enough shape, we’ll fix it up and give it to someone who has a medical need. If it’s not in good shape, we’ll store it and use it for spare parts to help repair the good ones. We’ll even buy some [wheelchairs] when we see a good one at a yard sale or flea market.

“We live here; we work here; we’re a part of the community,” he continued. “We want to overcome what a lot of folks think about a motorcycle club. They try to stereotype us through what they see in the movies or on TV. We’re just a bunch of local guys that love to ride motorcycles and give back to our community.”

The club has another fundraising effort underway. They are currently selling raffle tickets for an Old Henry .22 Lever Action Repeating Rifle ($2 per ticket or three tickets for $5). Proceeds benefit Krislyn Velvin, a local young girl who is battling cancer for a second time. The drawing is June 7. For more information, call 252-578-1416.

“This family really needs our help. Instead of waiting to give them the money all at one time (on June 7), we’re donating it $200 – $300 at a time as the raffle goes on,” said Byrum. “That way they can use it as they need it. We’ve invited that family to a cook-out on June 7 where we’re going to let Krislyn draw the winning ticket.”

SEABOARD – The nice thing about a community is that when one part is in need, others step up to... read more