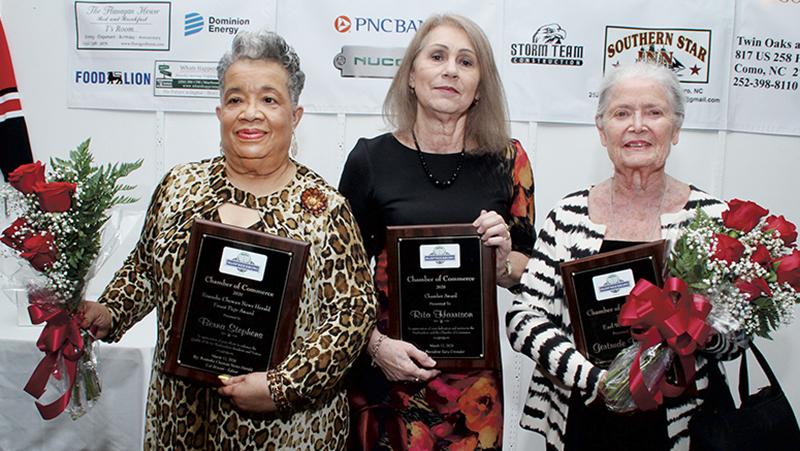 The annual Murfreesboro Chamber of Commerce Banquet included the presentation of three awards. From left, Berna Stephens received the R-C News Herald Front Page Award; Rita Harrison was honored with the Chamber of Commerce Award; and Gertrude Revelle was the recipient of the Earl 98.3 Community Service Award. Staff Photo by Cal Bryant

MURFREESBORO – Jay Jenkins, manager of the local WDLZ-FM radio station, was the keynote speaker at the annual Murfreesboro Chamber of Commerce Banquet held here on March 12.

The event focuses on celebrating the local businesses that make up the Chamber of Commerce and help the town’s economy thrive. Jenkins’ speech centered on the message that hard work pays off but only if there are people providing support along the way.

“I started my working career right here in Murfreesboro,” Jenkins said, citing his time at the radio station in town.

Over the years, Jenkins juggled careers in radio and newspaper and magazines. 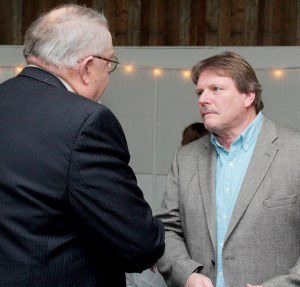 Jay Jenkins (right) chats with an individual at the conclusion of the annual Murfreesboro Chamber of Commerce Banquet. Jenkins, the General Manager of WDLZ-FM, served as the banquet’s featured speaker. Staff Photo by Cal Bryant

He did radio in Greenville and Ahoskie at times, and he’s also still the host of the popular weekly radio show “Shaggin’ on the Beach.” He also noted winning several Beach Music awards for his work in that field.

Additionally, Jenkins previously worked as a reporter, editor, and later publisher for local papers including the Roanoke-Chowan News Herald and the Bertie Ledger-Advance. He also took over as editor of what was known as “Down East” magazine at the time. To avoid conflict with a magazine with the same name, he changed it to “Eastern Living” magazine, which covers feature stories in several counties of northeastern North Carolina.

After leaving the newspaper industry, he returned to radio again to his current job as the manager of the local radio station, better known as Earl 98.3.

“It was a lot of hard work,” Jenkins said of his career.

“But I did none of this by myself,” he continued with emphasis. “I had a lot of good people, dedicated people, committed people, behind me to get anywhere I’ve ever gotten.”

He said that kind of community support is what the Chamber of Commerce provides for local businesses. He likened the Chamber as the “hub” in a wheel bringing together all the businesses as the different “spokes.”

“When we come together and work as a team, we accomplish more,” Jenkins concluded.

Earlier in the evening, Murfreesboro Chamber Director Daryl Williams welcomed the attendees to the banquet and updated members on accomplishments of the past year, including holding successful fundraisers and well-attended parades at Christmas and during the Watermelon Festival.

“We’re proud to be part of the town,” Williams said. “We are blessed that many businesses are doing well.”

Chamber President Sara Crowder said she was impressed with the accomplishments of the town’s businesses, and noted that small business is the “heartbeat” of Murfreesboro.

During the evening event, various annual awards were presented to deserving recipients. Gertrude Revelle received the Earl 98.3 Community Service Award. Berna Stephens, who serves on Murfreesboro’s Town Council, was the recipient of the R-C News Herald Front Page Award. Lastly, the Chamber of Commerce Award was given to Rita Harrison.