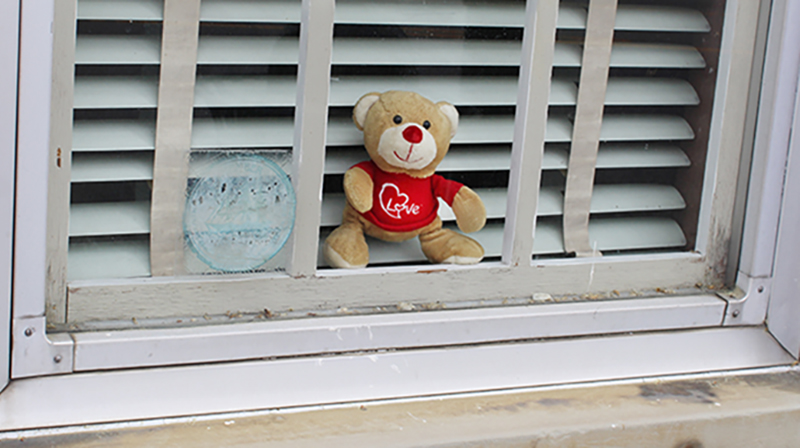 This stuffed bear shows their “love” to all passing by the Revelle & Lee law office on Main Street in downtown Murfreesboro. Staff Photo by Holly Taylor

MURFREESBORO – Residents of Murfreesboro and several other communities of the Roanoke-Chowan area recently have been spotting a certain kind of wildlife lurking in their neighborhoods.

Bears have been popping up everywhere, but only of the “stuffed teddy” variety. Perfectly harmless and ready to fill kids with joy, not fear.

The stuffed teddy bears can be seen resting in windows or soaking up the sun on a front porch. Some are in neighborhood houses while others make their homes in business storefronts. The bears come in all shapes and sizes, clad in t-shirts and caps or just their natural “fur coats.”

While much of the world struggles through the global COVID-19 pandemic, the cancellation of school and other social activities means that many kids are stuck at home and restless for new things to do. That’s where the teddy bears play a part. 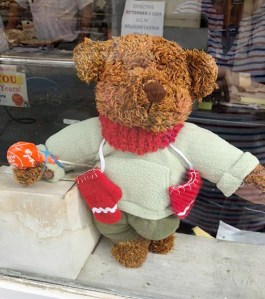 A teddy bear, complete with a lollipop, is on display at Flythe Brothers service station in downtown Conway. Contributed Photo

The idea is to place the bears, or any kind of stuffed animal, in a visible spot so families can take their children for a walk outside and “hunt” for the bears. It’s an activity that provides exercise while still following social distancing guidelines to prevent the spread of the virus.

“I wanted to participate because it’s important to be involved with your community to spread positivity,” said Jylian Lohman, a Murfreesboro resident. “I love that by doing such a simple action, we have the ability to make a big impact.”

Lohman said she has a whole “jungle” at her house, adding not only stuffed bears to her windows but also other animals such as a pig, an elephant, a tiger, a giraffe, and a marmoset.

“It makes me proud of my community and brings me joy to be able to help,” she said.

A Facebook group called “Murfreesboro ‘Bear’ Sightings” is a resource for people to share where the bears are located. Many have decided to participate, including some businesses on Main Street and even the Murfreesboro Police Department.

Elizabeth Villegas is the one who created the group, and said she had no idea how popular the idea would become. She originally had seen stories online of other towns doing bear hunts, and she asked around on Facebook if anyone locally was doing it too since she regularly takes her three children out on walks through their neighborhood.

By the evening of March 26, she had compiled a list of 16 streets with participating houses, and on their walk the next morning, the kids counted 45 bears. It’s been increasing ever since.

“This has really encouraged us to go to other parts of town, walk a little farther, or even drive to another part of town and get out and walk, so that we can find different bears,” Villegas said. “It’s encouraging to get a different point of view of the town.”

Villegas also pointed out another benefit of the bear hunt has been that counting is helping to improve math skills for her children, especially the younger ones.

Even though Murfreesboro may have been the first local town with a bear hunt, they certainly haven’t been the only ones.

Nikki Ward said she decided to put together a similar Facebook group for Ahoskie, and she asked many people and businesses to participate as well.

“It’s fun. It gives us something positive to look at, and something to look forward to,” Ward said. “I’m out and about all day long, so it’s good for me to see that stuff too.”

Ward said she was quite surprised at how many people have wanted to participate so far.

The bears have also made their way to Conway in Northampton County as well.

“We have a big heart for kids,” said Rachel Capel who recently added a teddy bear to the window of Flythe Brothers service station.

Their bear has a sucker in his hand to represent the lollipops and other candy they often hand out to children who visit the business.

Like others, she also saw the idea on Facebook and helped spread the word to others in the town. She’s hoping to get a few more bears to add to other buildings nearby, and she’s even added some Easter eggs for passing children to find.

All in all, the “bear hunts” are a good way for people to remain connected with each other even though they can’t do that physically right now. Villegas said they’ve seen not only bears on their walks through Murfreesboro, but many neighbors on their porches or driveways watching the walkers pass by.

“It reminds me a lot of trick-or-treating,” she explained. “It’s a time when kids can visit their neighbors and community. We’re still connected even while we have to distance ourselves.”