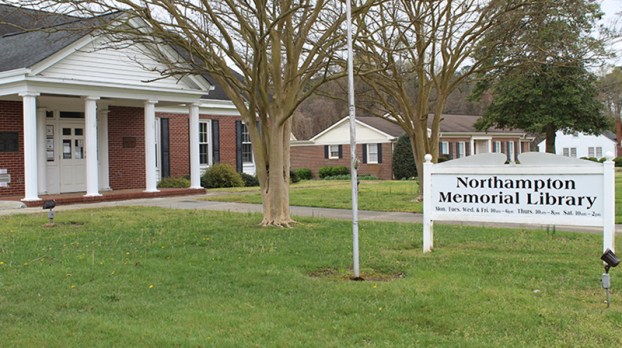 The Northampton Memorial Library in Jackson is among the seven branches of the Albemarle Regional Library system currently closed in an effort to present the spread of COVID-19. Staff Photo by Holly Taylor

WINTON – The seven local branches of the Albemarle Regional Library (ARL) are temporarily closed in order to comply with guidelines to prevent the spread of COVID-19 (coronavirus). They closed on March 18 and will remain so through April 1, though there is a possibility the closure will be extended.

ARL Finance Officer Larry Joyner told the News Herald they originally tried social distancing techniques such as disabling some computers in order to put space between patrons. But in the end they felt it would be safest to close for the time being.

“So many of the other libraries in our area and throughout the state have closed,” Joyner explained.

While the ARL branches are shut down, due dates for books due between March 18 and April 3 have been extended, and patrons will not have to pay a late fee. Each library’s dropbox, used for after-hours returns, is also closed right now. Signage has been added to let people know to hold onto their books for now if they stop by their local library.

Despite the temporary closure, however, the library system is still continuing to offer some resources for the community.

“We’ve got e-books and that sort of thing,” said Joyner. “We do offer that to our patrons.”

Joyner said there were approximately 66,000 titles for all ages available through both the North Carolina Digital Library and the NC Kids Digital Library. Links for those resources are provided on the ARL website (arlnc.org).

Additionally, all the ARL branches continue to have their wi-fi access available 24 hours a day, particularly to help patrons who do not have internet access at their homes. Joyner said people should be able to park at the library and use the wi-fi without having to leave their car.

If the libraries have to stay closed for a longer amount of time, Joyner said they might consider doing “curbside pickup” for patrons, but he emphasized they were still looking into the logistics for that and what sanitary procedures they would have to follow to carry it out.