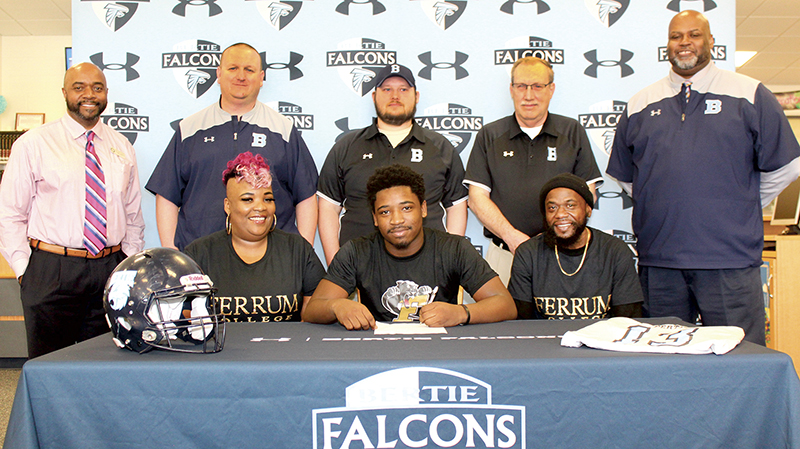 “It just felt like it fit for me,” Williams said. “When I went and talked to the coaches it was all-in on the academics and on the football field, so I just felt at home.”

After being a backup as a ninth-grader, Williams made a name for himself on both sides of the football. As a three-year starting quarterback for the Falcons, he finished his career with over 3,200 passing yards and another 1,321 yards rushing, accounting for 44 touchdowns.

For his senior year, Williams also played on defense, earning All-Northeastern Coastal Conference honors at outside linebacker where he finished the year with 41 tackles, an average of almost four per game. He was recruited as an athlete and has been told he’ll play on defense.

Williams says he plans to study business engineering with a minor in coaching. He also hopes to impress the coaches with his work ethic, thus speeding his debut on the team.

“They told me they wanted to get me on the field the quickest way possible,” Williams revealed. “To do that they said to do what I do here, work hard at my position and I’ll be on the field in no time.

“They called me an ‘Ironman’ because of the way I pushed myself last summer to be ready to play both ways,” he added.

“They’re getting a real high character kid,” said Williams’ former football coach Grantley Mizelle. “He’s kind of quiet, I like to call him the ‘Quiet Storm’ because he could be having the time of his life, but he’d never let you know it. He was the leader of our team for three years and with the work he’s done his progress is really outstanding.”

Mizelle says Williams’ leadership was a plus, especially this past season when the team had to fight through a season where they won just a single game.

“It’s not just about his playing ability, because that speaks for itself,” Mizelle continued. “It’s also about what he was able to do in taking control of the team. Last season we had a lot of adversity, and the year before that he also missed three games his junior year because of injury. Every year he’s always had something to fight through; and he’s been able to accomplish that both with his teammates and in the classroom. I can’t wait to see what he’s going to do next.”

Following Bertie graduation in June, Williams says he will head for the Old Dominion state sometime in mid-summer. In the meantime, he plans to lift weights and increase his stamina.

“I did a lot of that preparation last summer since I knew I was going to have to play both ways,” Williams said. “I want to bring a lot of hard work and effort, and my smoothness to the college game.”

Williams calls his ‘smoothness’ a very laid back attitude, while still maintaining a ferociousness between the white lines.

“Just ask anybody I’ve ever laid a hit on,” he says with a sly smile.

Having had to fight his way past many obstacles, Williams credits his parents, mom Shakeeta, and dad Michael Rayner, along with his girlfriend as the biggest influences on his life.

Highway litter is a costly problem