Coronavirus has placed a padlock on all high school athletic events across the state for public and private schools.

The North Carolina High School Athletic Association (NCHSAA) Board of Directors has suspended interscholastic athletics beginning at 11:59 p.m. on Friday, March 13 through at least Monday, April 6.

This includes all workouts, skill development, practices, and contests.

The NCHSAA Board will assess this situation regularly over the next few weeks.

Additionally, the NCHSAA has postponed its 2020 Men’s and Women’s Basketball State Championships indefinitely. Those events were scheduled for Saturday, March 14 at Reynolds Coliseum at NC State University and the Dean Smith Center at UNC-Chapel Hill. 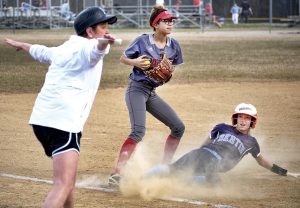 Bertie softball coach Jackie Copeland (left) begs for the “safe” sign as her player Alyssa Byrum slides into third base during Thursday’s game vs. Gates County at BHS. That contest marked one of the last ones played statewide as the North Carolina High School Athletic Association has suspended all games until at least April 6 due to the coronavirus. A.A. Imaging / Andre Alfred

“As much as we would like this opportunity for our student-athletes, coaches, and their communities, we know that ultimately any decision we make must err on the side of caution,” said NCHSAA Commissioner Que Tucker.

“I think Chapel Hill (the home of the NCHSAA office) has all the schools’ best interest in mind. Right now, we want everyone to be safe. We hope this situation does not last longer,” Simmons stated.

Bertie High School Athletic Director Grantley Mizelle said, “The NCHSAA made the decision based on the NCAA and major sports leagues. I just hope it will all subside and this will end April 6. I hate this for our seniors, and it is a tough situation. They are doing it for a precaution and everybody’s safety and health.”

The N.C. Independent Schools Athletic Association (NCISAA), which is in charge of athletics for most all private schools in the state, followed the lead of its public schools counterpart.

“The NCISAA has suspended all sports indefinitely,” Ridgecroft Athletic Director Susan Oliver said. “The NCISAA did this for everybody’s safety and health.”

The NCISAA says all games, scrimmages, and contests will be suspended indefinitely beginning March 13 and will remain suspended until further notice. However, NCISAA member schools may hold practices and training sessions at the discretion of the school.

“It goes without saying that the NCISAA is committed to the health, safety and well-being of our student-athletes and member schools. We will continue to navigate this situation with the health and safety of all our constituents as the top priority,” said the organization’s Executive Director Homar Ramirez.

Ramirez added that the NCISAA board of trustees will continue monitoring the situation.

The Roanoke-Chowan News-Herald reached out to Albemarle Regional Health Services (ARHS) on Friday in regards to information and preventative measures... read more