In memory of Eliza Mae 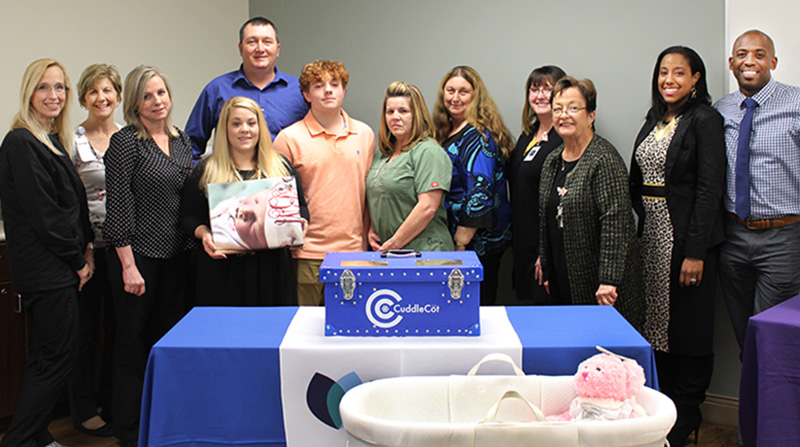 Ashley Brown and William Brown (fourth from left, holding a photo of their daughter Eliza Mae) are joined by Kennedy’s Angel Gowns founders, Heather and Demitri Wilson (right), along with members of the family and Vidant Roanoke-Chowan Hospital staffers on March 6 where a new “cuddle cot” was presented to the local hospital. Staff Photo by Holly Taylor

AHOSKIE – It’s a gift that will hopefully never have to be used.

Vidant Roanoke-Chowan Hospital now has a “Cuddle Cot” thanks, in part, to two families coming together to help anyone who may have to suffer the same grief they did. The “cot” is a special cooling pad inserted into a baby basinet which helps extend time a bereaved family has together after the death of their infant.

In October last year, Ashley Brown and her family arrived at the Ahoskie hospital ready to welcome their new daughter into the world. But Eliza Mae was born “sleeping” and the Browns were only able to spend a few short hours with her.

Brown said the hospital staff provided amazing care during her entire hospital stay, but her only regret was not being able to have more time with her daughter. Precious seconds ticked away too quickly.

Shortly after the tragedy, Brown connected with Heather and Demitri Wilson, founders of the nonprofit Kennedy’s Angel Gowns, which is named after an infant daughter the Wilsons lost in 2009. Demitri and William Brown—Ashley’s husband—are fellow firefighters in Virginia.

“We knew it was the loneliest we had ever felt,” explained Heather about how they felt in 2009, “so the second that we found out about Eliza, we dropped everything to be by their side.”

“It’s tough to go through something like this,” Demitri added. “It’s that journey you never want to go on. But you find others that are on that path, and to ride with them sometimes makes it a little easier to talk about, to get through those emotions.”

Kennedy’s Angel Gowns provides free infant burial gowns, which are sewn from donated wedding dresses, to bereaved families. Additionally, they also work to donate Cuddle Cots to hospitals which don’t have one. The Brown family assisted by holding a fundraiser last December selling barbecue chicken plates in order to get enough funds to donate a cot to Vidant Roanoke-Chowan.

“This is our gift to you. Thank you from the bottom of my heart,” Brown said to friends, family, and hospital staff when the cot was presented to Vidant on Friday, Mar. 6.

“I hope to God you never have to use it. I hope it sits in that box and never has to be taken out. But in the event that’s God’s plan and somebody else has to walk this path, I want you to have the resources,” she continued. “I want you to be able to give that little bit of time to those families.”

In addition to the Cuddle Cot, the Browns worked with Kennedy’s Angel Gowns to put together some “memory boxes” for the hospital to give to families who suffer the same kind of loss. The boxes contain a variety of items including a baby outfit, a crocheted angel ornament, some “mommy and me” jewelry, blankets, a journal, and a letter from Ashley.

Vidant Roanoke-Chowan Hospital President Judy Bruno and Lisa Rushing, the Nurse Manager for the hospital’s Women’s and Children Division, both expressed their gratitude for the gift and acknowledged the courage it takes to open up about grief and loss.

“From the bottom of my heart and from the entire Roanoke-Chowan family, I want to express my sincerest gratitude to you. You will make a difference in the lives of others,” Bruno said during Friday’s presentation.

Brown said she will continue to do what she can to support others just as she was supported during her own time of need. Some of that support will come through continuing to work with Kennedy’s Angel Gowns.

The nonprofit is hosting an “Angel Ball” fundraiser on April 18 at Nauticus in Norfolk. For more information about the event and the organization itself, visit their website kennedysangelgowns.org