EURE – Truman McDowell Greene, a retired farmer, died March 6, 2020 at Northampton Nursing and Rehabilitation Center in Jackson, N.C. He was 94 and a lifelong resident of the Eure community of Gates County.

Truman was grateful for his long journey on this Earth. He treasured his Christian faith, his 68-year marriage to his wife, Lillian “Kitty,” and his family. He relished a good Southern meal and was known to indulge in dessert after breakfast. 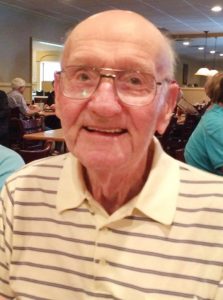 He was a fast walker. He was confident, patient, and slow to anger. He knew no strangers and had a twinkle in his eye when he laughed, which was often.

Truman loved country, Bluegrass, and gospel music. As a young man, he played and sang at house parties and candy-cookings around the area. Later, as a member of the Gates County Ramblers and the Hillbilly Pals, he performed on the radio in Suffolk, VA and Elizabeth City, N.C.

He passed down his love of music as well as specific songs to his children and grandchildren. No family gathering was complete until he grabbed his mandolin or guitar and said, “Let’s pick a tune.”

Truman was born July 7, 1925 and grew up on the family farm near the Corner High community. He was the second-youngest child of Exum Calhoun and Novella Eure Greene and the last survivor of their 10 children.

The year of his birth coincided with the first broadcast of the Grand Ole Opry and the opening of the first Sears Roebuck retail store. His life spanned 16 presidents, starting with Calvin Coolidge.

During the Great Depression, Truman attended school in Eure Station, often walking miles down the railroad tracks from his house. Lunch, he said without complaining, might be a cold sweet potato and a biscuit. The family worked hard to keep the farm going after their father died in 1931, when he was 50.

Truman’s quiet life was interrupted when he was drafted into the Army at age 18 via a notice, he liked to say, signed by another Truman (the president). He embarked on an adventure that took him across the ocean to Europe, where he served for several years as part of the Allied occupation of Germany following the war.

He returned home with memories of destruction, of desperation, and of children begging for his military-issued chocolate. He also retained some German words and phrases he would recite well into his 90s – including schokolade (chocolate). He later was called back into the Army and served stateside during the Korean conflict.

After the service, Truman’s life would again be transformed – this time by a chance meeting at a country store with a dark-haired beauty named Kitty Jones. He was smitten, but it would be several years before they began courting and playing music together.

Although Kitty’s father thought Truman was too old for her, their romance blossomed and they were married in 1951. Truman and Kitty’s sweet, enduring love continues to inspire their family and those who met them.

Truman’s farming life spanned waves of agricultural technology – from mule and plow, to several generations of tractors, to a computerized combine with a cab. He grew corn, peanuts, and soybeans. Truman also raised chickens, hogs, and cows – setting aside some for the freezer or the smokehouse. Truman never fully believed store-bought meat measured up.

His Christian values were evident in everything he did, and his prayer life was strong. Someone once said that when he prayed, it seemed he was talking to his best friend.

Later in life, he shared his faith through his family’s gospel music band. The Truman Greene Family released four CDs and performed twice at the Roanoke-Chowan Pork Fest and at local churches. WQDK in Ahoskie featured their music on its Sunday morning request line. Truman was always happy to hear his songs played on the radio and to share them with others.

Despite his lack of formal education, he exuded common sense as he calmly confronted life’s challenges. His message: don’t sweat the little stuff and always be grateful.

In addition to his wife, Truman is survived by his seven children, Larry (Paula) of Niceville, Fla.; Gerald of Eure; Otis of Nashville, Tenn.; Paul (Rebecca) of Durham; Emily Winslow (Barry) of Corapeake; Anne White of Jackson; and Roy (Tinker) of Cambridge, Mass.

Arrangements are by Miller Funeral Home in Gatesville, where a visitation will be Wednesday, March 11th, from 6:00 to 7:30 p.m. The funeral will be Thursday, March 12th at 11 a.m. at Eure Christian Church where Truman was a long-time member and former deacon. Military Honors will be accorded. The burial will follow in the church cemetery.

The family would like to thank Deborah Holley and the staff at Northampton Nursing and Rehab for their care and kindness.