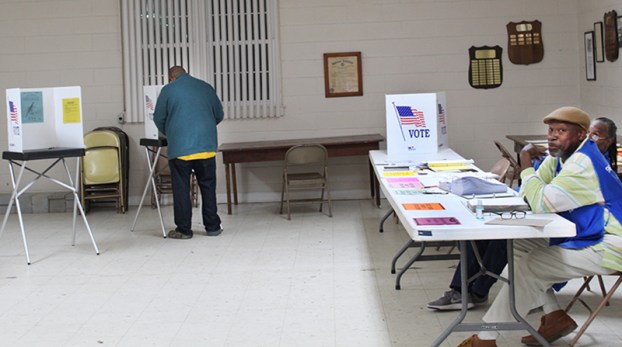 A single voter (left) casts a ballot while poll workers at the Conway/Milwaukee/Pendleton precinct wait for additional citizens to enter on Tuesday evening. Countywide, a shade over 42 percent of Northampton registered voters cast ballots in the Primary Election. Staff Photo by Holly Taylor

The Northampton County primary results showed incumbents prevailing for some races, while newcomers were victorious in others. This is the first election since some of the county’s precincts were merged, bringing the total from 18 down to 13.

According to the unofficial results, the Democrat incumbents for the two Board of Commissioner seats narrowly secured their nomination for November’s general election. The District 1 race was decided by a margin of 225 votes, and in District 2, it was a margin of 304 votes.

In District 1, incumbent Charles R. Tyner, Sr. faced off against challenger Marcenda Rogers. Tyner received 2,498 votes to Rogers’ 2,273. Tyner secured the nomination by winning only five precincts, most of which were located in the western part of the county. His largest margins of victory came in the Garysburg/Pleasant Hill precinct by 240 votes and Gaston by 185 votes.

Tyner also received almost 300 more votes than Rogers during One Stop early voting. Broken down by the three One Stop voting sites in the county, the results between candidates were almost evenly split except for the site in Gaston. Tyner received 508 early votes there compared to Rogers’ 178.

The results for the District 2 race showed similar numbers to District 1.

During One Stop early voting, Riddick-Faulkner received 382 more votes than Hollowell. Again, the votes were close at two of the One Stop sites except for the one in Gaston where she received 552 votes to Hollowell’s 137.

No Republican candidates filed for the Board of Commissioners seats, so Tyner and Riddick-Faulkner will seek their second terms unopposed in November’s general election.

Voters also cast their ballots to fill four seats on the county’s Board of Education with nine candidates seeking election. The three incumbents—Clinton McCray Williams, Keedra Whitaker, and Richie Harding—did not manage to garner enough votes for another term.

Only 19 votes separated fourth and fifth place with Williams receiving 1,991 votes. The rest of the results showed Whitaker with 1,700 votes, Sondra Goffington Dickens with 1,215, Harding with 1,066, and Patrice Robinson Jordan with 865.

There were 486 write-in votes cast in the Board of Education race.

The top four BOE candidates will be sworn in to start their term in July.

In the race for Governor, Democrat voters were able to pick between incumbent Roy Cooper and challenger Ernest T. Reeves. Cooper easily secured his nomination across the state with over 1.1 million votes. In Northampton, he received 3,711 of those votes to Reeves’ 817. He won all the county precincts except for the one in Lasker, where Reeves received just two more votes than Cooper.

The Republican candidates for Governor were Dan Forest and Holly Grange. Forest defeated Grange by a large margin statewide, receiving a total of 694,929 votes. He also carried all the precincts in Northampton County, garnering 592 votes to Grange’s 55.

Forest, who is currently serving a term as the state’s Lieutenant Governor, will face off against Cooper in November’s general election for Governor.

In Northampton County, however, Holley didn’t win any precincts and came in third after candidates Ron Newton (1,809 votes) and Allen Thomas (816 votes). But Republican voters in the county fell in line with the rest of the state by choosing Robinson as the top candidate with 209 votes.

Voters who turned out for the Tuesday primary were also able to cast their ballot for their preferred Presidential candidate in their party. Joseph R. Biden was the Democrat candidate with the most votes across the state, receiving almost 43 percent of the vote. In the Republican primary, Donald J. Trump received 93 percent of the vote statewide.

Northampton County voters generally fell in line with the rest of the state, with Biden carrying the county with 2,650 votes in the Democrat primary and Trump receiving 658 on the Republican side. Biden was the Democrat candidate with the most votes in every Northampton precinct except Lasker, where he was beaten by nine “No Preference” votes.

The voter turnout in Northampton County was a little over 42 percent. That’s about one percent higher than the last time Presidential candidates were included on the primary ballot in March 2016. The statewide turnout was around 31 percent.

Results will remain unofficial until canvassed by the county Board of Elections. The general election will be held on November 3.