POWELLSVILLE – While Bertie Beach and other recreational activities on the 147 acres Bertie County owns along the Chowan River Estuary and the Albemarle Sound are showing great promise for the future, there’s a belief that more can be extracted from the natural and human history of what has been known as the ‘Tall Glass of Water’ (TGOW).

That’s what East Carolina University professor and head of the NC-LOW (Land of Water) project, Dr. Stanley Riggs espouses, and he presented portions of his expansion program – an education center proposal – to the Bertie County Commissioners at their Feb. 10 meeting in Powellsville.

“Bertie County has 147 acres down on the west end of the Albemarle Sound called the Tall Glass of Water, and just south of that property is another 1,300 acres now owned by the state for a state park called the Salmon Creek Natural Area,” Riggs acknowledged. “Because of requirements this must be preserved land. However, there are things that can be done with preserved land.” 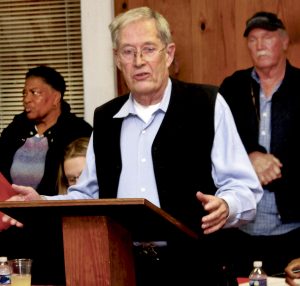 ECU Professor Dr. Stanley Riggs, head of NC-Land-of-Water presents a proposal before the Bertie County Commissioners for a natural and human history education center to be built on lands the county owns along the Chowan River Estuary and the Albemarle Sound. Staff Photo by Gene Motley

“This would be a field education program on the 1,500 acres for the citizens of Bertie County called the ‘River to Sounds Field Education Program’,” Riggs noted. “It would benefit the teachers and students not only of Bertie County, but also of the surrounding region.”

The professor said the county could go to the state and get a buy-in as part of the Governor’s Education program, which includes a $3.9 billion bond issue for education which Riggs says will be on the November 2020 ballot.

Riggs says this would be a partnership between Bertie County, and the NC Department of Natural and Cultural Resources, including the Division of State Parks and Division of Archives and History.

“This is what our history is all about,” Riggs acknowledged. “It’s about the resources of this county and the cultural history of this county going back thousands of years from Native Americans, through Colonial times, and includes African-Americans, Asian Americans, and Latin Americans.”

He said it would include the areas of hunting and fishing, the farming culture, herring fishing on the Chowan, and other critical parts of the county and the region.

“We have a very good team of people,” he said. “I think we can make this happen.”

In conclusion, Riggs put forward a couple of requests: first, that NC-LOW represent Bertie County in pursuing the possibility of the partnership with the state on the Rivers and Sounds Field Education program for the Salmon Creek property, and, that Commissioner Ernestine Bazemore would join with NC-LOW in representing the county in future meetings before state officials.

“I think it’s absolutely crucial that we can make this happen, but we need a Bertie County person in these meetings, because it would make all the difference in the world,” Riggs explained. “And I hope for your approval because things are moving fast.”

Following Riggs’ presentation, Bertie Commissioners chairman Ron Wesson called the professor one of the country’s leading experts on waterways, and that his work is beyond the work on TGOW.

“He has been working with us not just in terms of development of this property, but also coastal flooding and what can be done about it,” Wesson said. “Your expertise, Dr. Riggs, has been invaluable to not just us, but the Town of Windsor in our planning and what we can do to mitigate some of these things. Your work is vitally important.”

Wesson pointed to the NC Coastal Land Trust’s purchase of the 1,300 acres next to TGOW.

“Not only do we have the only public beach on the Albemarle Sound,” Wesson offered. “But now we have a natural area – a state park preserve – that can be used by citizens.”

Wesson said eventually, development will include an amphitheater, camping, RV parking, an educational component, and more.

“This can be a real destination,” he asserted. “A real reason to come to Bertie County, and we need partners like NC-LOW to help us develop the educational component.”

Wesson then called for a motion on both NC-LOW representing Bertie County in negotiations with the state, and of Commissioner Bazemore as the county’s personal representative. Commissioner Tammy Lee made the motion which was seconded by Commissioner John Trent, and passed unanimously.

“By putting this along with the other four or five water hubs that the county has here, you really have something here by the Bertie water crescent that is unique to the world,” Riggs said. “It is truly world class.”