RALEIGH – The number of awards won by the Roanoke-Chowan News-Herald keeps growing.

On Thursday, the North Carolina Press Association (NCPA) announced the winners of the 2019 Advertising, News, Editorial and Photojournalism Contest during its annual meeting and Winter Institute held in Raleigh. There, NCPA officials presented the Roanoke-Chowan News-Herald with four awards.

“What makes this type of recognition even more worthwhile is that these awards are bestowed by our peers in journalism and advertising who are members of press associations in other states,” said News-Herald Editor Cal Bryant. “They apparently know what the readers of the Roanoke-Chowan News-Herald have come to expect – having an award-winning publication in their hands.” 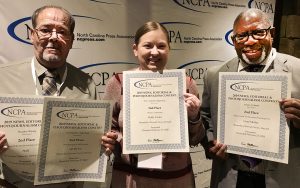 Staff Writer Holly Taylor won her first-ever NCPA award with her three-part series on Human Trafficking, which published in late August of last year. That second place award was in the News Enterprise Reporting category.

Gene Motley was again rated at the top of the best column writers in the state. His work for 2019 was judged in second place.

Motley was a first place winner in the 2016 NCPA Editorial and Photojournalism Contest for his work in writing serious columns.

Cal Bryant was recognized by the NCPA in the category of General News Reporting. His story on a Gates County family whose young son is autistic and the battles they face daily was a second place winner.

The News-Herald staff also won a second place award in the category of Headline Writing.

Only three winners are named in each category within each newspaper division. The News-Herald competes in Division C (non-daily publications with a circulation of more than 10,000 per week).

There were over 4,400 entries sent in from NCPA members statewide for the 2019 contest.

News-Herald staff writers are routinely recognized for their work by the NCPA.

In 2018, Motley earned second place in Sports News Reporting. One year earlier, Motley earned the highest honor in the category of City-County Government Reporting with his three-part series on the financial difficulties experienced in 2017 by the Bertie County Public School system, and its plan to fix those problems.

In 2016, the Roanoke-Chowan News-Herald’s news and ad staff combined to earn 11 awards, the highest total ever won by this newspaper in a single year. Four of those winning entries were judged in first place.

COMO – Twin Oaks Adult Home here remains closed and under investigation by state officials in the aftermath of one... read more