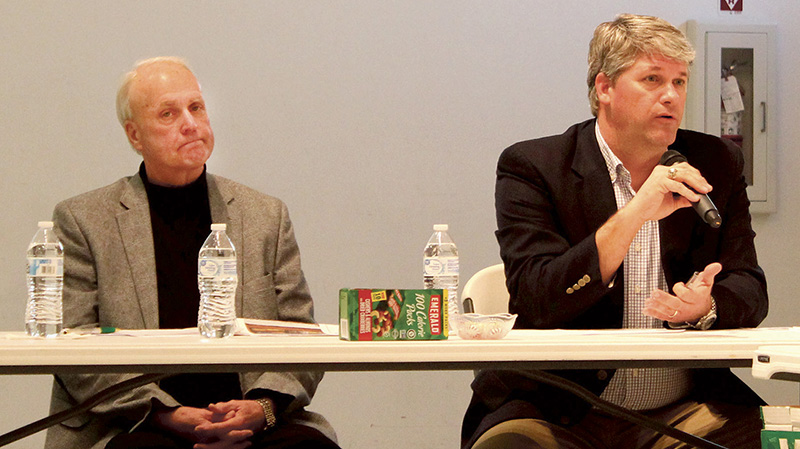 JACKSON – Economic development was one of the main topics of discussion when the Northampton Board of Commissioners and the Jackson Town Board held a joint meeting here on Feb. 17. Since last year, the commissioners have coordinated several of these kinds of meetings in order to bolster communication between municipalities and county government.

“Thank you for your support,” said Board Chair Charles Tyner, recognizing a collaborative effort for recent projects such as the grocery store which opened last year.

“We really appreciate all the hard work the county has put in,” acknowledged Jackson Mayor Jason Morris.

In his opening remarks, the mayor recognized the positive impact business has on the town, saying “we always have an open door for all businesses that would be looking to locate in the town. We welcome that. Growth is a great thing, and we want the town to grow and be prosperous.”

Town Commissioner Jim Gossip added that they were hoping to bring more business to town soon. He also noted an upcoming expansion project at the State Employee’s Credit Union office which will bring new jobs and more tax money to the area.

County Commissioner Nicole Boone asked if the town was open to bringing in a fast food chain restaurant as a way to draw in more people, particularly those who aren’t local and may just be passing through.

Gossip answered that, in the past, they haven’t usually pursued businesses like fast food chains, particularly because the dollars from those kinds of larger chain businesses don’t always flow back to the community.

“We have exercised a preference to cater to those local independent entrepreneurs, but we have an open door policy, so we’d certainly consider anything of that nature,” he explained.

“Small businesses make a difference in the economy of Northampton County,” said Tyner, noting a marked increase in sales tax revenue for the county this year because of new businesses.

Looking to the future, Tyner said one of the county’s goals is to bring in a developer to build some houses in or near Jackson to provide more places to live for local workers, such as government or school employees.

Gossip asked about the $15 million grant the school system received for new school construction last year, noting that any new building would need to utilize the town’s wastewater treatment facilities.

“We’re leaving that up to the Board of Education,” Tyner answered, but promised to keep the town informed of any updates.

Another part of the discussion centered around Barrows Mill Road when Mayor Morris asked if there was any update on an old proposed project to expand sewer service to the road located west of Jackson on Highway 158. A citizen who lives on the road also spoke up at the meeting, explaining that sewage issues have been ongoing for years and many of the residents are senior citizens.

The Board of Commissioners approved an application for Community Development Block Grant (CDBG) funds back in September 2018. The project, however, was not funded and not implemented.

Tyner said they would look into the issue to see what could be done.

At the conclusion of the meeting, Tyner thanked the town of Jackson again for their support, and Morris encouraged people to continue shopping locally to support businesses within the town and county.