Chairman Michael Freeman, along with members James Pugh and Miles Davis, plus Windsor store General Manager Clint Freeman, were on hand to make a special presentation to the county.

“I’m not coming here to bring you grief, and I’m not here asking for anything,” Michael Freeman joked. “In fact, I’m here to give you something.” 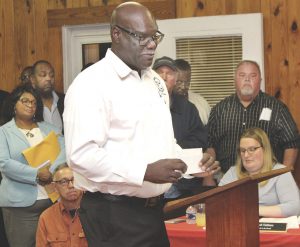 Bertie County ABC Board chairman Michael Freeman displays a check for $12,002.50 that the ABC Board presented to the county at the Feb. 10 meeting of the Bertie County Commissioners in Powellsville. Staff Photo by Gene Motley

Freeman then presented the Commissioners a check in the amount of $12,002.50, representing profits the ABC Board received for 2019, but that was not the only bonanza the county would receive that night.

“This is made out to the Bertie County Commissioners,” Freeman said. “But it is earmarked for law enforcement.”

The second payment, in the amount of $165, represented a contribution from the ABC Board to the Bertie County Sheriff’s Office, as well as the North Carolina Highway Patrol, for their participation in events that raise the awareness of the dangers of drinking and texting while driving.

The most recent event was an Alcohol Awareness Day held at Bertie High School last spring which included representatives from the ABC Commission, the Highway Patrol, and the Talk-It-Out Speaker’s Bureau addressing the students.

Freeman did not bring the $165 check, but said that the additional benefit, along with still another check that would be presented to the Town of Windsor, would be made at a later date.

“We’re always delighted when you bring money,” quipped Commissioners chairman Ron Wesson, which received laughter and applause from the assembly. “We’re honored to have a very good (ABC) Board which operates the one store we have here in the county; and to show you how connected they are to the rules and operations statewide, we need look no further than Mr. Miles Davis, who is the president of the state ABC Association.”

WOODLAND – Governor Roy Cooper’s office announced on Feb. 19 a multitude of grant and loan awards for water and... read more