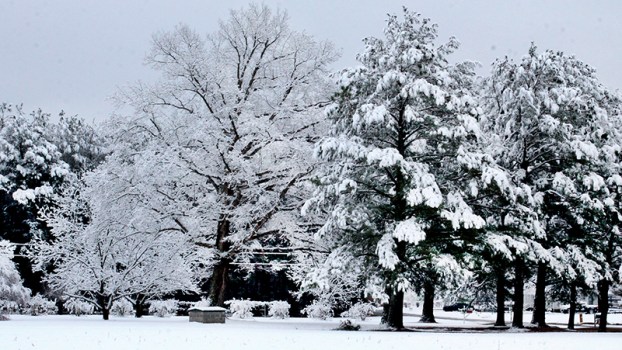 A heavy, wet snow clings to the branches of these trees on Pinetops Road in Northampton County on Friday morning. Staff Photo by Cal Bryant

February’s roller-coaster weather made a hard turn back towards Winter thanks to a Thursday storm that dumped as much as five inches of snow across the Roanoke-Chowan area.

This comes exactly two weeks after several severe storms impacted the region on Feb. 6. In-between there have been wide disparities in the temperature – a day or so of what feel likes Spring followed abruptly by another visit from Old Man Winter.

As for Thursday’s 10 hours of steady snowfall, the good news was there were no major issues locally.

“It was fairly quiet as far as a snowstorm goes; we received between four and five inches,” said Chris Smith, Hertford County Emergency Management Director. “We had a rash of calls on Thursday night that our fire departments throughout the county answered with tree limbs down on power lines. It was a wet, heavy snow that caused a lot of limbs to sag and make contact with electrical lines.” 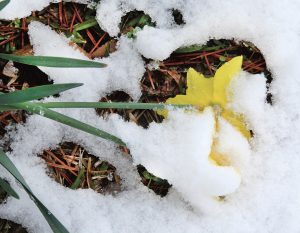 After blooming two weeks ago, a daffodil was pushed to the ground thanks to Thursday’s snowfall. Staff Photo by Cal Bryant

As of 12 noon on Friday, Smith said there were roughly 600-to-700 homes without electricity.

“The power crews were out making repairs on Friday and making pretty good headway in getting power restored,” Smith stated.

With the temperature remaining at or just above freezing on Thursday night, Smith said local roads were in good shape.

“I would encourage motorists to play it safe on Friday night into Saturday morning,” he cautioned. “The temperature was supposed to reach the low 20’s, maybe the upper teens, Saturday morning before sunrise. Whatever did melt on Friday will freeze hard and cause some icy spots early Saturday. Please be careful if you have to be out on the road at that time.”

Emergency Management Director Mitch Cooper said there were no major issues with the winter storm. He said a portion of Wakelon Road was closed on Friday from White Swamp to near Todd’s Crossroads. He was hopeful that stretch of road would reopen later in the day.

Dominion Energy and Roanoke Electric Cooperative said there were about 790 power outages countywide in Bertie, but crews were working Friday to get the electricity restored.

Gates County’s snowfall measured four-to-six inches. The higher amounts were in the western and central portions of the county.

Billy Winn, Gates County’s Emergency Management Director, said the icy roads were responsible for four to five wrecks on Thursday, but none were reported as serious.

“The weather here was pretty much a non-issue,” said Winn. “As of mid-day on Friday, all county roads were passable. NCDOT and Gates County EMS has cleared most of the fallen debris, which was not extensive.

“With Friday’s warm-up, much of the snow and ice is melting, but we expect a re-freeze tonight (Friday) into Saturday morning and we are advising residents to be cautious if they’re out on the roads,” Winn added.

Weather conditions will rebound nicely on Saturday where sunshine and a high of 50 degrees are in the forecast. It will warm to the upper 50’s on Sunday, again under sunny skies.

By the time the new workweek arrives, look for highs of near 60 with an increasing chance of showers on Monday into Tuesday.