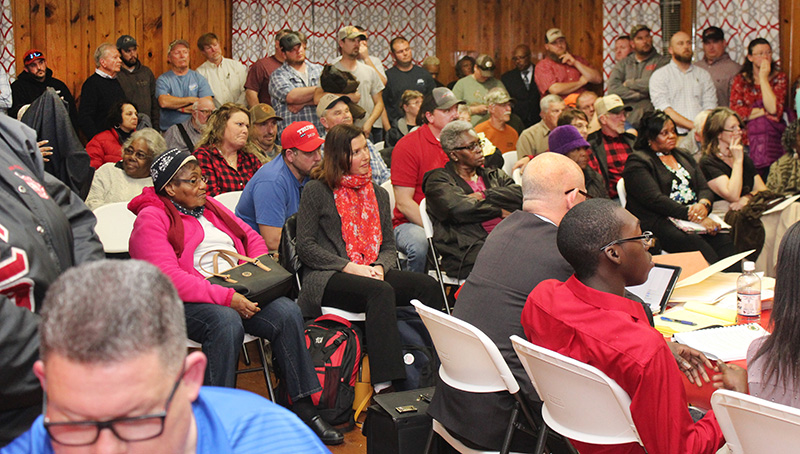 A packed crowd attends Monday’s meeting at the Powellsville Community Building where the Bertie County Commissioners passed on adopting a resolution prohibiting or impeding the enforcement of certain gun control measures and would make Bertie a 2nd Amendment gun sanctuary county. Staff Photo by Gene Motley

POWELLSVILLE – An overflow crowd of nearly 100 persons packed the Powellsville Community Building for Monday night’s Bertie County Commissioners’ meeting, and while a myriad of topics was on the agenda docket, many were there for one thing: hoping Bertie would join over half the 100 other counties in the state in adopting a resolution written to protect the rights of gun owners in North Carolina. It would essentially make Bertie a 2nd Amendment gun sanctuary county.

The move is essentially symbolic and most says the resolution is meant to show that county enforcement officials plan to defy state or federal efforts to restrict gun rights.

Just this week, four more counties and two municipalities brought the number who has adopted some form of gun sanctuary resolution to 56 in North Carolina.

But, Bertie County won’t be joining them, at least not for now.

When a motion was made to adopt the resolution, it was not seconded by any of the Commissioners, essentially tabling it; something that did not please many in the crowd who supported the measure.

Both the Commissioners and the resolution’s supporters say the resolution needs more work in its wording before it could be adopted.

The evening began during the public comments section of the agenda when two opponents to the measure spoke before the Board.

Rev. Kennedy Barber, pastor of St. Luke Missionary Baptist Church in Windsor, cited a 2013 resolution adopted by the Bertie Commissioners that not only supported the 2nd Amendment, but exempted certain firearms records of the Sheriff’s Department from public scrutiny.

“I believe it (the 2013 resolution) is also sufficient for the cause of home protection and for safety,” Barber noted.

“I feel safe here,” acknowledged Merry Hill resident Willard Carney. “Maybe there are some in here who don’t, but with these guys standing here (Sheriff’s deputies), I can walk the streets, no problem.”

Garry Terry, county chairman of the Republican Party, said his group supports the 2nd Amendment, but admitted he had not read the resolution.

“The Constitution isn’t a living, breathing entity, it’s rock-solid,” Terry said. “They’re the laws and foundation this country is built on, and I don’t see anything changing.”

As there were no more comments on the resolution, the meeting followed the agenda until it was time to consider the measure. Commissioner Tammy Lee, who helped author the proposal, read it for the record. Here is the original resolution in its entirety:

RESOLUTION IN SUPPORT OF THE 2ND AMENDMENT TO THE CONSTITUTION

OF THE UNITED STATES OF AMERICA

WHEREAS, the Constitution of the United States is the Supreme Law of our nation; and

WHEREAS, the Second Amendment to the Constitution of the United States of America states: “A well-regulated Militia being necessary to the security of a free State, the right to keep and bear arms shall not be infringed;” and

WHEREAS, the right to bear arms is necessary for self-defense, the defense of others including family members, the protection of individual liberty and for the preservation of our United States Constitution: and

WHEREAS, the Bertie County Board of Commissioners wishes to express its deep commitment to protecting Bertie County citizens Second Amendment Rights; and

WHEREAS, the Bertie County Board of Commissioners wishes to express opposition to any aw, regulation or any other act that would infringe on the Second Amendment Rights of Bertie County citizens; and

WHEREAS, the Bertie County Board of Commissioners express its intent for Bertie County to stand as a Constitutional Rights Protection County for the Second Amendment Rights by opposing any efforts by any entity to restrict these Rights. Opposition will include any means available under the U.S. Constitution and the laws of North Carolina including the withholding of funds, direction of County employees, legal action and other means as deemed necessary and legal; and

NOW THEREFORE BE IT RESOLVED that Bertie County Government will not authorize or appropriate government funds, resources. employees, agencies, contractors, buildings or offices for the purpose of enforcing or assisting in gun confiscation or other restrictions that infringe on the right to keep and bear arms by law-abiding citizens as expressed in the Second Amendment to the United States Constitution

BE IT FURTHER RESOLVED Bertie County Government shall utilize all legal means necessary to protect the Second Amendment Rights of the Bertie County citizens including, but not limited to, legal action.

Following Lee’s reading, two other citizens who may have helped draft the language spoke for the record.

“It’s sending a message we’re not going to just do nothing when they start infringing on any of our rights,” said Lynne Hughes. “Whether it’s freedom of speech, or freedom of religion, because they’re doing that, too.”

Merry Hill resident Andrew Ownbey, in citing his extensive personal firearms collection, says he stands by what he feels the resolution would add.

“I’m passionate about my legal right to defend my family, my property, and the Constitution, if need be,” Ownbey said. “We took Surry, Lincoln, and Bladen counties and combined what their resolutions had to make ours.”

Both speakers used examples of real-life situations where the use of firearms was a deterrent.

When they were done, Lee said she stood in full support of the measure and would like to see it pass. She then made a motion to accept the resolution. Chairman Ron Wesson called for a second to the motion, but there was none.

“There must be a second from this body on a motion to vote on any resolution,” the Chairman said. “The resolution was read, the motion was made, and there was no second, so it failed.”

Each Commissioner then spoke, including the two former veteran law enforcement officials: John Trent and Greg Atkins. Some said there were legal questions, and offered to work to change the wording to something that stood a greater chance at passage.

Others spoke, mostly defenders of the resolution, getting their comments into the record. Ownbey returned during final public comments and vowed to return with the measure, in some form, to be taken up by the Board at their March monthly meeting in Windsor.