But someone forgot to tell that to Ridgecroft’s seniors.

The Lady Rams played a near-perfect game in the title tilt, led by 1.000-point career scorer Brooke Rose who closed out her TIC playing days with a 19-point effort and her fourth straight tournament championship, as Ridgecroft School upset Northeast Academy 57-43 on Saturday in the championship game. 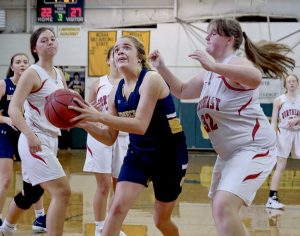 “We knew what we had to do, we just had to execute the plan,” said Rams coach Susan Oliver. “I told them to just keep going, attack, attack, and that’s what they did.”

The Eagles were playing their second tournament game in less than 24 hours, having won a semi-final with Hobgood Academy on Friday night. Ridgecroft, meanwhile, barely survived a scrappy Pungo Christian in their semi-final on Thursday.

The championship match started with The Rams blowing out to a 6-0 lead before Northeast gathered themselves and pulled into a 6-6 tie. They then scored a couple of easy lay-ups by Emalee Jones in the low post before the Rams came back with two late field goals of their own to knot things at 10-10 at the end of the first quarter.

Coming out to start the second quarter, Leah Woodard hit a three-point basket, and the Rams never trailed again. Ridgecroft was also efficient at the free throw line, only missing eight total foul shots for the entire game, going 12-for-20 at the charity stripe. The Rams built a lead in the quarter of 11 points, 24-13, before Northeast began to claw their way back with under three minutes left in the half.

Carly Stephenson then hit a bucket and Jessie Martin made one. But it was Martin’s buzzer-beater three-pointer that brought the Eagles within five, 27-22, for halftime.

It was still a five-point Ridgecroft (29-24) lead early in the third quarter before the Lady Rams put on an offensive explosion. Led by Rose, and fellow-senior Emma Lane working in the low-post, the Rams outscored NEA, 15-to-2, stretching their lead out to 18 points, 44-26. After a late Lane lay-up, Rose calmly sank two foul shots to put the Eagles in a 21-point hole headed into the fourth quarter.

Northeast’s scoring woes continued for the early part of the final frame. The Rams took their biggest lead with 3:08 to play, 57-33, before NEA scored the last 10 in a row to fall by 13. The Eagles loss ended a string of 19 straight TIC wins.

Both teams made the post-season and played first-round games last night (Tues.), but were not complete by press-time. Ridgecroft hosted Christ Covenant School while Northeast hosted Crossroads Christian.