Ann was born on August 17, 1934 at Midway in Bertie County, NC and was the youngest daughter of the late Zebulon Thomas Miller and Lizzie Farless Miller of Midway, NC. Ann was the youngest of four children; she had two brothers, Merle and Carroll Miller, and one sister, Cornie Hoggard. Ann spent her childhood in Midway, NC, where her parents owned and operated Miller’s Exxon Service Station and Miller’s Motor Court, the precursor to today’s motels. Being located on Highway 17, and before the development of the interstate highway system, Highway 17 served as one of the main roads between New York and Florida. During World War II, Miller’s Exxon Service Station was extremely busy fulfilling a government contract to provide fuel and services to the military convoys moving along the Atlantic Seaboard. 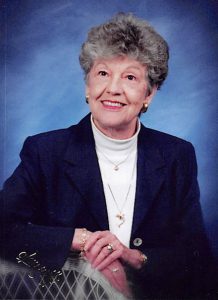 Ann married Herman Hallet Daniels (Hal) from Colerain, NC on March 25, 1956. Hal, having graduated from the University of North Carolina-Chapel Hill in 1952 with a Bachelor of Science in Pharmacy, began his pharmacy career in Wilson, NC. Several years later, Hal applied and was accepted into the Naval OCS Program in Newport, RI. Commissioned as an Ensign in the United States Naval Reserve, Hal was later promoted to the rank of Lieutenant JG. It was during Hal’s third tour of military duty that Ann and Hal were married and off she went to be by his side while he was stationed in Philadelphia, PA. Ann spoke fondly of their time in the military and living in military housing on the naval base.

Ann and Hal moved to Kinston, NC in 1957 upon Hal’s completion of his active military duty.  It was while living in Kinston that Ann and Hal were blessed with their first child, Kimberly Anne Daniels (Mrs. Edward Mardre Cherry).

Now with a young family, Ann and Hal decided they were ready to move back home to northeastern North Carolina. In 1958, Hal joined Earl Capps, Sr. as co-owner of Capps-Daniels Drug Co. in Ahoskie, NC. Ann and Hal made Ahoskie their home, became active in the community, and were always extremely proud to call Ahoskie their home. Ann was active in the Ahoskie Garden Club, Ahoskie Junior Women’s Club (President, 1965), and Ridgecroft School. She was a member of the First Baptist Church of Ahoskie for over 62 years.

In 1961 Ann and Hal were blessed with the birth of their second child, Henry Hallet Daniels. Henry continues to live in Ahoskie and much like his Mom, is active in the community and a friend to all.

Ann was a homemaker, wife and mother. Such a description, while complete, would not begin to adequately portray Ann. Her love and devotion to her children and husband was exceptional. She was quick to make friends, and once a friend of Ann, always a friend, during good and bad times. Ann was a lovely and creative person with a zest for life. She found great enjoyment in painting, working in her yard tending to her flowers, playing the piano, cooking, and hosting candlelight family dinners. Her home was always open to the neighborhood children and was filled with laughter. Until only a few years ago, many of these same neighborhood kids, now adults with children and grandchildren, would make the annual Christmas Eve visit to see Ann and Hal while home in Ahoskie for the holidays.

Ann ran the Daniels home, and it was this contribution by Ann that allowed Hal to focus on building one of the largest pharmacy practices in northeastern North Carolina. Ann always waited for Hal to come home; a family dinner was a requirement in Ann’s home, and was not to be served until everyone was home, regardless how late. Hal spoke often of the importance of knowing Ann was home with the children and how he truly cherished the loving and caring home she had created. Ann and Hal had a true love story their entire marriage, and they are now blessed to be reunited.

Ann cherished her family time. Ann loved to go to their summer home on the Chowan River, where she enjoyed spending time with family and friends. Ann looked forward with great anticipation to the annual weeklong vacation at Myrtle Beach, a family tradition for over 40 years. On the last day of this annual vacation, Ann and Hal, along with the friends they had made during those Myrtle Beach vacations, would book the same rooms for the same week for the upcoming year. Family and family traditions were very important to Ann.

Ann’s love of music, painting, flowers and friends are found in her children and grandchildren. Her daughter Kim is fond of saying, “Flowers are a simple luxury my Mom taught me to appreciate.”

This story would not be complete with mentioning the small book, Buddy and Me, that Ann wrote recounting her childhood memories and experiences during the 1930s and 1940s. The book is dedicated to Ann’s brother, Carroll Miller, who was less than 2 years older than Ann, and whom Ann called “Buddy” his entire life. Ann and Buddy had a special relationship that only siblings of similar age can develop and one they cherished their entire lives.

Many of Ann’s most cherished moments came with her children, grandchildren, and great-grandchildren. They brought her joy, laughter, and friendship.

The family is grateful to the doctors and caregivers who cared for Ann during her illness, and to all who shared kindness in different ways for many years. Special thanks to Lillie Steele, Shelia Jones, Wilhamina Sessoms, Lorraine Pierce, Cathy Speight, Joyce Bracy, and Becky Vinson.

A Celebration of Life Memorial Service will be held at 2 p.m. on Friday, February 14, 2020 at the First Baptist Church of Ahoskie, 312 Main Street West, Ahoskie, NC with Dr. Trey Gilliam officiating. The family will receive friends at a reception following the service in the fellowship hall.

Arrangements are in the care of Garrett-Sykes Funeral Service, Ahoskie, NC. Online condolences can be shared at www.garrettsykesfs.com