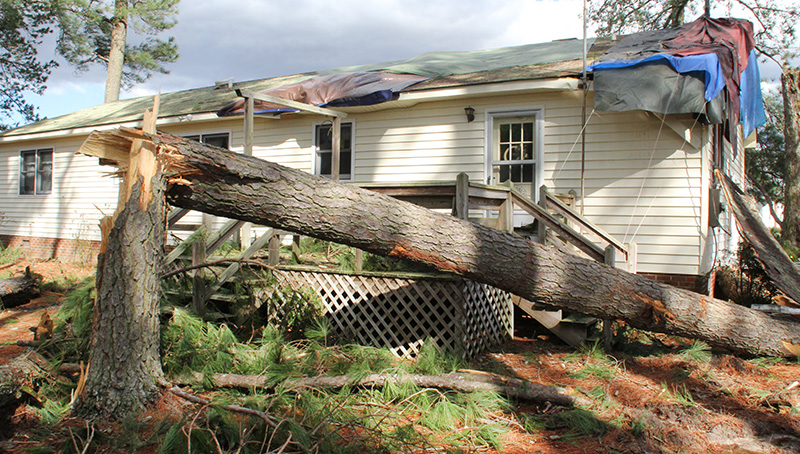 Carmen Askew’s home in Gates County suffered major damage as a result of either a small tornado or straight-line winds on Thursday afternoon. Staff Photo by Cal Bryant

GATESVILLE – They are battered and bruised, but most of all thankful for the opportunity to live another day.

That appears to be the overall mindset of Gates County residents who rode out a wicked storm on Thursday afternoon that left homes, farm buildings, and timber damaged; power lines down, and roads blocked to either fallen trees or rising water.

Fortunately, there were no reports of bodily injury.

After touring the hardest hit areas of the county Friday, an official with the Wakefield, VA office of the National Weather Service concluded that the damage was caused by three sources: an EF-0 tornado – that on was the ground for approximately three miles – a “gust-nado” and straight line winds. 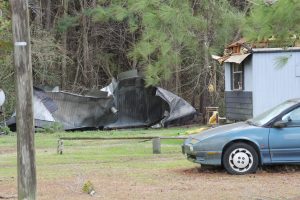 The roof of this mobile home on Harrell’s Church Road in Gates County was ripped off in Thursday’s wicked storm. Staff Photo by Cal Bryant

“We got hammered pretty hard, but the good news is there are no injuries,” Winn said.

He said there are 42 instances of damage in the county, to include split or downed trees and to structures.

“We have three-to-four homes with extensive damage,” Winn reported. “Two of those are total losses, a singlewide mobile home on Harrell’s Church Road where the roof was blown off, and a tree that fell across the roof of a mobile home on Medical Center Road. In the case of the latter, the tree penetrated the roof and then it rained inside the home all night, which added to the damage there.”

Another of the hard-hit locations was at the intersection of Turner Road and Askew Road, northwest of Gatesville. There, the home of Carmen Askew was heavily damaged by several downed trees, two of which fell onto the roof and left 10 holes. Some of that debris wound up in her kitchen and living room.

“It’s an inconvenience now, but I’m safe and my family is safe,” said Askew. “Nobody was hurt. We can repair the damage.”

“I didn’t hear a roar,” she said, referencing what many say is a sign of a tornado. “All I heard was the sound of trees cracking and falling.”

Betty Hora, who resides on NC 137 approximately two miles from Askew’s home, had stopped to check on her friend.

“I saw this huge gray cloud coming towards my house,” Hora said. “The wind picked up very quickly and all I heard was the pine cones hitting my windows. It sounded like glass breaking. It was all over in about two-to-three minutes.” 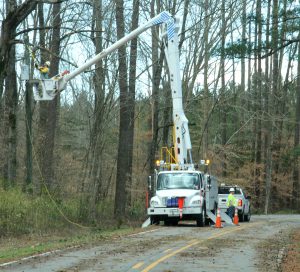 A crew with Dominion Power makes repairs Friday morning to an electric pole and wiring on Askew Road in Gates County. Staff Photo by Cal Bryant

Further up Askew Road, a farm trailer was blown over on its side while a nearby farm building had damage to its roof.

One started on Powell Road, off US 13 just across the Winton bridge, and traveled east, basically moving along or just north of NC 137. After passing north of Gatesville, that line continued east, brushing Merchants Millpond State Park before crossing the area of Medical Center Road and ending at Kellogg Fork Road.

The second swath of damage started at Gatlington Road, off US 13 north of Tarheel, and traveled east along Gates School Road and Willeyton Road before ending at Drum Hill near the Virginia line.

There remained isolated pockets of power outages as of Friday afternoon, down from the 1,600 homes without electricity on Thursday.

Winn said the American Red Cross has been summoned to assist those with damage. He added that the North Carolina Baptist Men are scheduled to arrive on Saturday to offer assistance as well.

It’s over, and I won’t miss it