Ahoskie Fire Chief George Michael Bradley said the blaze originated in a commercial building on NC 42 West that is leased by David Hunt. There, Hunt operates his business – Hunt’s Auto Center – and sub-leases space to Ahoskie Auto Sales and The Barber Shop.

“Fire was showing through the roof at the front of the building when we first arrived at 2:51 am,” Bradley said. 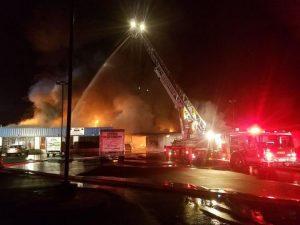 Due to the size and scope of the blaze, Bradley also asked for the Millennium and St. Johns volunteer fire departments to be dispatched to the scene.

All totaled, there were 10 units and 39 firefighters on the scene.

Adding to the inferno, Bradley said, were 10 vehicles that were parked inside the repair shop of Hunt’s Auto Center.

“This marked the first time we had the opportunity to use our new platform (ladder) truck,” Bradley said. “It performed as expected as we were able to get on top of the fire instead of having to fight the fire all from ground level.

“The platform truck also saved the other exposures at the scene, to include numerous vehicles parked outside,” Bradley added.

He said the cause of the blaze is under investigation by the Ahoskie Police, specialized personnel with the Office of the State Fire Marshall, and an ATF (Alcohol-Tobacco-Firearms) agent.

The last Ahoskie unit left the scene at 2 p.m.

On Friday, the owner of The Barber Shop posted on Facebook that he had found a temporary home for his business on Main Street across from the Ahoskie Town Hall.