WINDSOR – After four years at the helm, Bertie High School head football coach Grantley Mizelle has hung up his whistle.

Mizelle announced his resignation after four years on the job.  He led the Falcons to a 15-31 record of guiding the Falcons and has an overall head coaching record of 31-42.

“I want to officially inform you of my resignation as head football coach at Bertie High School,” Mizelle stated in a release announcing his decision. “I will continue to be a PE teacher at the school, and in addition to my teaching duties I will serve as the school’s athletic director.” 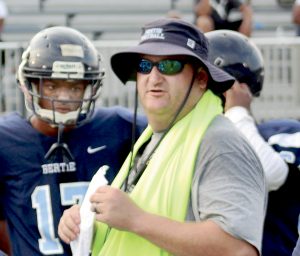 Grantley Mizelle has announced his resignation as head football coach at Bertie High School. Mizelle, who will remain with the school as a physical-ed teacher and Falcons athletic director, leaves after four years at the helm. File Photo by Gene Motley

Mizelle, who graduated from Lawrence Academy in Merry Hill and later Elizabeth City State University, led Bertie to the post-season in three of his four seasons as head coach, only missing out this season when the Falcons finished with a record of 1-10.

“I look forward to spending more time with my family and enjoying many hobbies that I have missed during my 16 years in coaching,” Mizelle added. “I want to thank everyone for their support and Go Falcons!

“I’ll miss the Friday night feeling of coaching … and the kids,” he acknowledged. “The good thing is being AD and teaching, I’ll still be able to interact with them.”

Armed robberies on Thursday may be connected