COLERAIN – What began as an investigation into a robbery ended with the alleged victim behind bars.

Charles Stephen Mizelle, 56, of White’s Beach, located near Colerain, was arrested Jan. 13 after a moonshine still was located on his property. 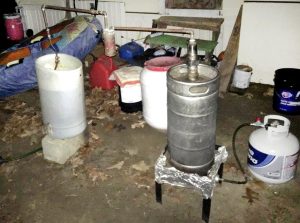 According to Bertie Sheriff John Holley, the incident began at around 4 p.m. on Jan. 13 when Bertie County Communications dispatched patrol deputies to White’s Beach to a report of a suspicious person.

Bertie Sheriff’s Chief Deputy Kenny Perry was the first to arrive on the scene and made contact with the caller and Mizelle. Bertie Sheriff’s Sgt. Doug Jernigan arrived on scene to assist Chief Deputy Perry. The deputies were informed by Mizelle that he was being robbed at his White’s Beach residence by a group of males in a white car. He said he ran out of the house and went to a nearby residence to get help.

Perry and Jernigan then went to Mizelle’s property to make sure there was no one inside of the home or anywhere else on the property. While on the Mizelle property, the two law enforcement officers located what appeared to be a moonshine still behind the house.

Perry and Jernigan were assisted by Sheriff’s Detective William Barmer in the investigation of the reported armed robbery.

Bertie Sheriff’s Major Matt Roebuck was called to the scene to investigate the moonshine still and he determined that it was in fact an active operation, Holley said. Roebuck then contacted NCALE. Agent Johnson concluded the investigation of the illegal operation upon his arrival at White’s Beach.

Deputies assisted ALE agents with the dismantling and discharge of the still and its contents on the scene. The still was seized along with a small amount of moonshine from Mizelle.