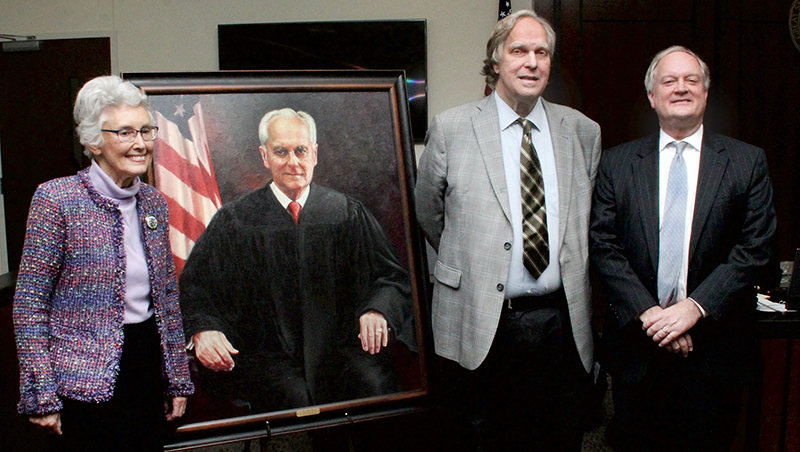 From left, Emily Copeland Cato, James Copeland Jr. and Buck Copeland, the children of the late North Carolina Supreme Court Associate Justice James William Copeland, stand alongside the newly unveiled portrait of their father which will hang in the Superior Courtroom inside the Hertford County Courthouse. Staff Photo by Cal Bryant

WINTON – Unlike courtrooms all across the state and nation, Hertford County’s judicial space has been void of visible tributes to past scholars of the legal system since it opened in 2015.

That fact no longer applies.

Copeland, a native of Woodland who moved his family and law practice to Murfreesboro following his service in World War II, was first elected to the NC Supreme Court in 1974. He served on the state’s highest court until his retirement in 1984 and his portrait has been displayed there since Oct. 26, 1990.

“I find it only fitting and appropriate that the first portrait to be hung in this courthouse would be one of our own North Carolina Supreme Court Justices – Justice James William Copeland,” noted Judge Grant.

Judge Grant went on to say that he personally never had the occasion to meet Justice Copeland. 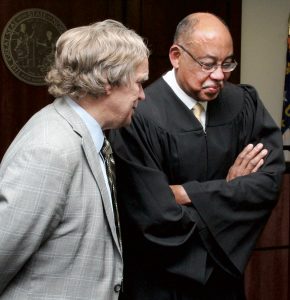 “But of all I’ve read and all I’ve heard about him, there were certain qualities that stood out,” Judge Grant remarked. “He was an extremely intelligent man; he was a legal scholar who was very fair minded. He had a keen sense of right and wrong. I read that he had a gregarious personality and generally liked people.”

Of all the positive qualities possessed by Justice Copeland, the one that stood out to Judge Grant was the fact that prior to becoming a State Supreme Court Justice, Copeland served for 14 years as a Special Superior Court Judge.

“In that role he traveled all across our state holding court,” Judge Grant stated. “He held court in nearly all 100 counties of our state. As a Superior Court Judge myself, I can personally attest that is no small feat.”

“We grew up together, attended school, church and various local functions together,” Lee recalled. “All three of his children went on to become attorneys.

In 1950, James William Copeland was elected as one of two men to represent the 1st NC Senate District (Bertie, Camden, Chowan, Currituck, Gates, Hertford, Pasquotank, and Perquimans counties). He served as a State Senator until 1961, and then as the Legislative Counsel (lawyer) for North Carolina Governor Terry Sanford. Gov. Sanford appointed Copeland as a Special Supreme Court Judge in 1961.

“Justice Copeland was widely known and held in high regard all across our state,” Lee stressed. “He enjoyed traveling our state, many times accompanied by (wife) Miss Nancy.”

“First of all he had an astute knowledge of the law; and secondly, he understood people, be they clients, defendants, law enforcement officers, other judges, and elected officials,” Lee said.

“Always a people person, he was able to communicate his vast knowledge of the law and his advice and counsel was frequently sought,” Lee remarked. “His office was next to mine and I was always amazed at the number of people he knew and spoke with, whether they be local or statewide.

“If lists were drawn of people who contributed to Murfreesboro, to Hertford County, to the Roanoke-Chowan area, to northeastern North Carolina, and to our state, Justice Copeland’s name would be high on each list. He served his fellow man with integrity and with strong moral character. He made our state a better place. It’s fitting and proper that his portrait hangs in the Supreme Court Building in Raleigh and now here in our Hertford County Courthouse,” Lee concluded.

Justice Copeland’s youngest son, Buck, who is still practicing law in Raleigh, spoke on behalf of the family.

“I was a child when dad was a Special Supreme Court Judge traveling all across our state,” recalled Buck Copeland. “Every year he would hold one week of court in Hertford County. One year he brought me along to the courthouse and let me pick the jury. Back then you literally picked pieces of paper out of a box. They were marked with the names of prospective jurors. I picked the jury that day and he paid me my very first dollar. I still have that dollar framed with a photo of me and him.”

He credited the idea of this particular portrait presentation to his now late mother.

“Shortly before she died in 2012 she told me to get another portrait done to hang in the Hertford County Courthouse,” he recalled. “Well, here it is 2020 and I finally got it done. This portrait is identical to the one that hangs in the Supreme Court Building in Raleigh. It’s done by the same artist.”

He thanked his wife and Judge Grant for all the work they did that led to the hanging of Justice Copeland’s portrait in the Hertford County Courthouse.

“We are honored to accept this portrait from the Copeland family,” stated Gatling.

Eley Whitehead, a Murfreesboro native and longtime friend of the Copeland family, opened the ceremony with invocation.

James William Copeland was born on June 16, 1914 in Woodland, the son of Luther Clifton Copeland and Nora Lucille (Benthall) Copeland.

After graduating from Woodland-Olney High School (there were only 11 grades back then and he skipped one grade) he enrolled at the age of 16 at Guilford College from where he graduated in 1934. Three years later he earned his Jurist Doctor degree, with honors, from the University of North Carolina School of Law.

Upon graduation he returned to Woodland where he opened a law practice and was eventually elected as the town’s mayor.

On October 11, 1941, Copeland married Nancy Hall Sawyer of Elizabeth City, daughter of Marvin Buck Sawyer, an attorney, and Emily Robinson (Hall) Sawyer. She was a schoolteacher in Rich Square.

From 1942 to 1946, Copeland served as a Lieutenant in the U.S. Navy. Upon returning stateside, Copeland worked in the Judge Advocate General’s Court in Charleston, SC.

He died on Feb. 3, 1988 and is buried in Murfreesboro’s Riverside Cemetery.

Other than James William Copeland, two other Roanoke-Chowan area natives have served as Justices on the North Carolina Supreme Court.

William Nathan Harrell Smith, a Murfreesboro native where he was an attorney, served as Chief Justice from 1878-1889.

Lycurgus Rayner Varsar was born in Gates County, but spent most of his adult life in Robeson County. He was appointed by Gov. Angus McLean to the North Carolina Supreme Court as an Associate Justice on March 16, 1925. Justice Varsar resigned from that position on Dec. 31, 1925.