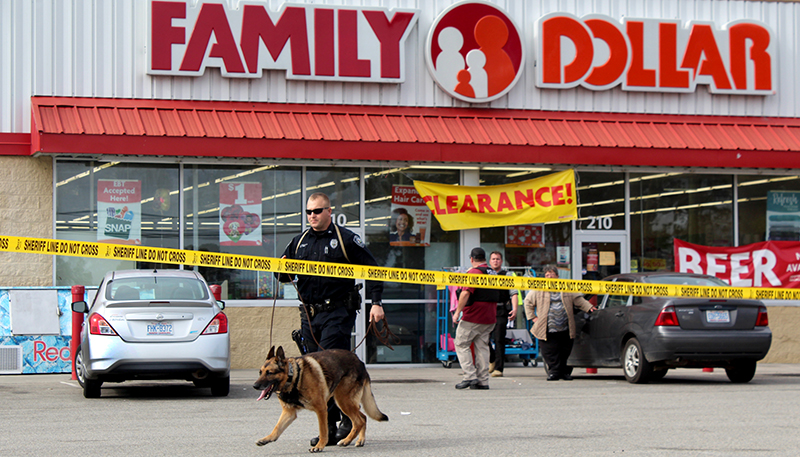 Sgt. Michael Kellett of the Ahoskie Police Department’s K-9 unit begins the search for a suspect wanted for the armed robbery of the Family Dollar on Friday morning in Colerain. Staff Photo by Gene Motley

COLERAIN – The Bertie County Sheriff’s Office and other area law enforcement spread out a dragnet searching for a suspect who robbed the Family Dollar discount store on NC Hwy 45 just south of here on Friday morning.

The Sheriff’s Office received a call around 11:30 a.m. that an unknown armed man had entered the store and demanded the cash receipts. There was also a report of a possible second suspect involved. 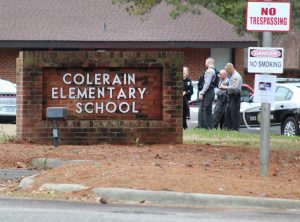 Several North Carolina Highway Patrol Troopers station themselves outside of Colerain Elementary School that was placed on lockdown Friday due to the armed robbery. Staff Photo by Gene Motley

During a verbal exchange with the clerk on duty at the time, the suspect discharged a gunshot from an as yet unidentified firearm that ricocheted off the concrete floor, striking the cashier in the arm and causing a small glancing wound to their forearm. The clerk was treated at the scene by Bertie County EMS as the injuries did not require hospitalization.

The suspect then fled on foot with an undetermined amount of cash, exiting the front of the store and retreating into the wooded area adjacent to and directly behind the store.

The Ahoskie Police Department’s K9 Unit under Sgt. Michael Kellett was called to the scene and assisted in the search, hoping to pick up the scent of a trail.

As a precaution with the incident, both Colerain Primary Care at the corner of River and Cedar Streets, along with Colerain Elementary School on Academy Street were both immediately placed on lockdown. The lockdown was later lifted sometime after 12:30 p.m. Friday afternoon.

This latest larceny marks the second time in less than one year this same Family Dollar store has been held up.

Holding out for a hero in the evening light