Wednesday night they won their ninth league game in a row with a convincing 48-20 win over Hobgood Academy at Hobgood.

It took the Lady Raiders a while to get in gear for the contest as the smothering NEA defense held Hobgood to a single point on their own home floor in the first quarter. Meanwhile, the Lady Eagles racked up 18 points – 16 unanswered – to claim a comfortable lead. 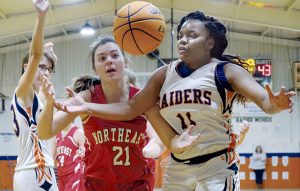 It was 32-5 at halftime, but the Raiders fought off a chance to make it a ‘running clock’ game. Also, Northeast’s third quarter scoring woes continued. For the second straight game, they scored less than ten points in the frame, but still led 37-16 heading to the final eight minutes. Again, rising up in the fourth quarter they barely missed a 30-point margin, settling for a victory by 28.

And, Carter Hatcher hit for a career-high 18 points as the NEA boy’s jayvee went down to the final quarter against the Raiders before capturing a 42-35 win for Northeast. Six different Eagles players scored while Hobgood was led by Hudson Roberson with a dozen points scored.

Finally, the Northeast boys failed to capture their second conference win in a row as they fell to the running Raiders 62-38. Brandyn Polson scored 19 points while J.T. Simmons added 11. Kendall Timberlake was bottled up inside for most of the night and finished with six points while Josh Simmons had two points.

Northeast played in Belhaven at Pungo on Friday night (Jan. 24), with the varsity girls facing their stiffest test of the season. None of those games were completed by press-time.

The Eagles close out the regular season with a pair of home games next week: Lawrence Academy on Tuesday and Ridgecroft School on Friday for Senior Night.