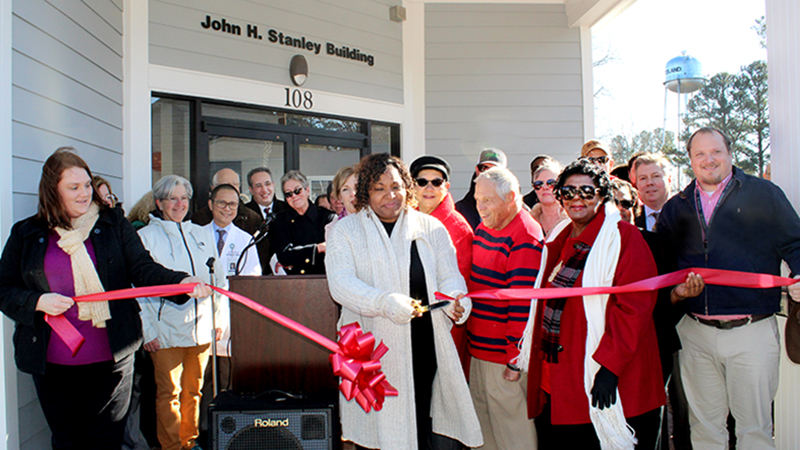 WOODLAND – Even though Woodland lost its longtime resident doctor last year, his patients now have a local place in the community to continue to look after their medical needs.

Woodland Primary Care held an official ribbon-cutting ceremony and building dedication on Wednesday, Jan. 22 to celebrate the opening of the newest facility under the Roanoke Chowan Community Health Center (RCCHC) umbrella. The building bears the name of Dr. John H. Stanley, the physician who served the town of Woodland and Northampton County for over 60 years until his death last March at the age of 92. 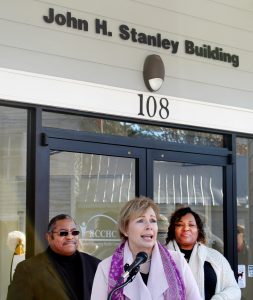 “This has been a long time coming,” said Kim Schwartz, CEO of RCCHC, as she welcomed the crowd.

She said the planning for the facility began about two years ago, and they decided very early on that it would be dedicated to Dr. Stanley to carry on his legacy.

“We’re so proud of the footprint Dr. Stanley has left for us to follow,” said RCCHC Board Chair Deborah Morrison in her remarks.

“We’re here because concerned citizens and community leaders believed Roanoke Chowan Community Health Center would be a great fit and a champion in meeting the healthcare needs of this community,” she continued. “We really appreciate this community for welcoming us in.”

Morrison recognized and thanked many for helping bring the project to fruition.

The new facility, located at 108 W. Main Street in Woodland, formerly housed Southern Bank before it closed down. She noted that the banking company had allowed them to purchase the building at a discounted price. She also thanked the Golden Leaf Foundation for a grant to help them renovate the space so it would function as a medical care facility.

“It’s an honor and privilege to see the people here coming together,” he said.

But the main focus of the celebration was remembering the life of Dr. Stanley. His friends Dan Joyner, Dr. Charles Sawyer, and Dr. Emmanuel Zervos each took a few moments to talk about the late physician and about how he supported the new facility to ensure that his patients were cared for after he was gone.

“We take people like John Stanley for granted, spoiled by his compassion, his seemingly endless availability, and dedication,” said Dr. Zervos. “This facility bearing his name is a fitting and appropriate tribute to his life.” 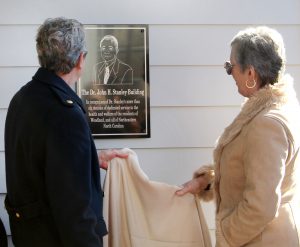 “While I know John wouldn’t endorse this medical advice,” he continued, “as I physician I order you all to think about him and the care he provided for so many years to this community as you cross under this threshold which bears his name for compassionate and expert care.”

Before the ribbon-cutting ceremony at the end of the event, Dr. Stanley’s daughters unveiled a plaque which will hang by the building’s doorway to commemorate his six-decade legacy of healthcare service.

Woodland Primary Care will be open from 8 a.m. to 5 p.m. on Tuesdays, Wednesdays, and Thursdays, and closed for lunch from 1-2 p.m. daily. The facility will be served by Dr. Gilberto Navarro and Dr. Laurie Hulsman. For more information, call 252-587-3511.