This ‘diamond’ will be polished 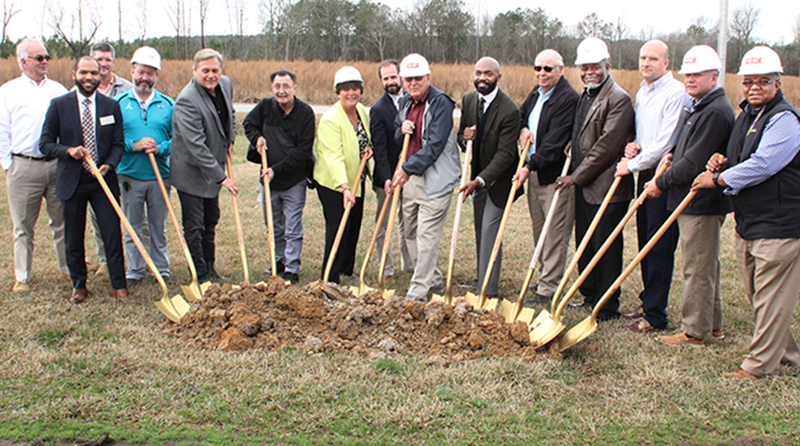 Members of the Tri-County Airport Authority are joined by local and state guests, along with construction and engineering personnel, as they break ground on the new terminal at Tri-County Airport. The ground-breaking ceremony was held Jan. 15. Staff Photo by Cal Bryant

AULANDER – A much-needed facelift to Tri-County Airport is officially underway.

After years of planning, ground was formally broken Jan. 15 for a new terminal at the airport. It will replace an aging building, one with major structural issues, that was initially occupied in 1978.

Lee paid special recognition to Johnnie Ray Farmer, a retired Hertford County Commissioner who spent years on the Airport Authority, several of those as its chairman.

“He was the one we all need to thank the most for getting the ball rolling on this project,” Lee stated. 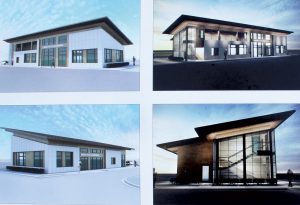 An architectural drawing shows the design of the new General Aviation Terminal planned for construction at Tri-County Airport. Staff Photo by Cal Bryant

“The current Airport Authority members along with our engineering firm have spent many, many hours talking, planning, and a lot of dreaming to make this day possible,” she added. “None of this would be possible without our friends at the NC Dept. of Aviation. We give them a huge thank you for supporting this project.”

North Carolina legislators representing the Roanoke-Chowan area were invited to last week’s groundbreaking, but were unable to attend as they were in session in Raleigh. Lee did signal out one of those legislators – Howard Hunter III who represents District 5 in the NC House.

“Howard worked hard, making a lot of phone calls to help make this day possible,” Lee said. “Early in the process, Representative Hunter, Representative Michael Wray (of Northampton County), and State Senator Erica Smith all came together on this. Representative Hunter went beyond the call of duty by working to ensure that the local counties covered by this airport did not have to provide any matching funds to build this new terminal. It is being built totally with state and federal funds.”

She noted the words of former Airport Authority Chairman Tom Asbell who called the facility, ‘a diamond in the rough.’

“Well, today, that diamond, this airport, is undergoing a polishing process,” Lee stated. “This old building is being torn down and a new terminal will take its place. We are super excited over this.

“This new terminal will be something that the citizens of Bertie, Hertford and Northampton counties can be proud of,” Lee continued. “When people fly in to this airport, they will see a modern, up-to-date and hopefully welcoming terminal. They will be able to see that we take pride in our facilities and they will feel the need to do business with one of our three counties.”

Lee recognized veteran Tri-County Airport Manager Henry Joyner for all the work he has done over several decades to promote and help lead the way for improvements at the facility.

“He also has the task of keeping the Airport Authority members informed and up-to-date on what is taking place here,” Lee remarked.

The new terminal will encompass 3,200 square feet. The facility is the latest of several improvements over the past few years at Tri-County Airport. Those other projects were for a new rotating beacon/tower and a new parallel taxiway.

Previous projects included the installation of a jet fuel-aviation gas system in 2015, and runway lights in 2012.

Tri-County Airport was commissioned in 1963 with the runway paved in 1965. It was built to not only serve local pilots and their aircraft, but also to aid with transportation for many of the businesses and industries Bertie, Hertford and Northampton counties.