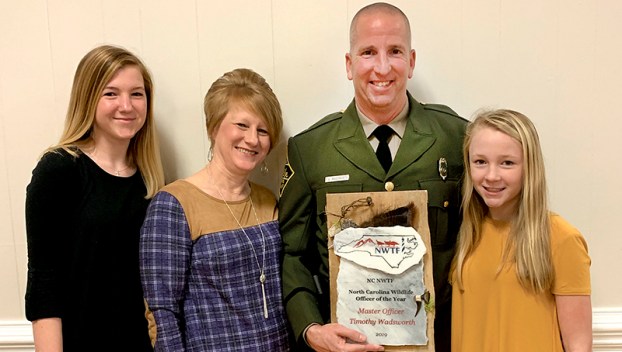 Tim Wadsworth stands proudly with his family – daughters Morgan and Belle (left and right) and wife, Valerie – after being named as North Carolina’s Wildlife Officer of the Year by the National Wild Turkey Federation. Contributed Photo

AHOSKIE – A local wildlife officer will soon find himself in Tennessee competing for a national honor.

Last week in Greensboro, Tim Wadsworth was named the 2019 Wildlife Enforcement Officer of the Year by the North Carolina Chapter of the National Wild Turley Federation (NWTF).

Wadsworth, a veteran North Carolina Wildlife Commission Officer assigned to Hertford County, will now advance to the NWTF’s national convention, slated for Feb. 12-16 in Nashville, Tennessee. There he will be joined by Officer of the Year winners from other states in hopes of claiming the national honor.

“I wasn’t expecting the state’s NWTF award,” said Wadsworth. “I was so honored when they called my name.

“Thanks to the NWTF State Board for thinking enough of me to give me this award. I know the other eight officers who were nominated were deserving of this award too,” he added.

There are nine Wildlife Districts across North Carolina. Wadsworth explained that each District nominates one of their officers for the state NWTF award.

“Once the District’s nominee is chosen, the supervisor of each district submits a write-up to the NWTF State Board that details the reasons why their officer’s name was submitted,” Wadsworth said. “A nominee is not only judged for their work as a Wildlife Commission Officer, but also for what they do within the community where they live.”

Wadsworth, employed by the NC Wildlife Commission for the past 16 years, has a long list of attributes within his community. He is a Deacon at Union Baptist Church, where he also volunteers to work with the youth ministry; a member of the State Employees Credit Union (Ahoskie branch) Advisory Board; a member of the Roanoke-Chowan Wildlife Club; the current assistant coach for the junior varsity girls volleyball team at Ahoskie Christian School; and a former tee-ball, baseball, and softball coach for the Ahoskie Recreation Department.

Apparently, the NWTF Board recognized Wadsworth’s talents as a Wildlife Officer and the impact he makes in his community when his day job ends.

“I would like to thank God first of all because without him none of this would be possible,” Wadsworth said.

He also thanked his family and friends.

“Thanks to my parents, Alvin and Jean Wadsworth, for loving me and raising me to love Jesus and to love others,” he stressed. “Thanks to my wife, Valerie, and my daughters, Morgan and Belle, for loving and supporting me in all that I do. And thanks to my church family and friends for all your support.”

“Thanks to them for giving me this awesome job. Thanks to my fellow coworkers and supervisors who nominated me for this award and who have my back at all times,” he said.

“I know I’m not perfect and never will be, but I’m always trying to be the example God has called me to be to my family and to all the people I come in contact with. I am truly a blessed man,” Wadsworth concluded.