WILMINGTON – In the time since Rob Burke was named interim head coach of the UNCW men’s basketball program on Monday, he’s had several conversations with one of the state’s most successful college basketball coaches: his father, Bob Burke.

During that time, the two – the father-son coaching duo – have talked about the program’s current state. Bob said his son held his first practice on Tuesday and has sat down with each player one-on-one in addition to holding team meetings.

By the time UNCW welcomed defending CAA champions Hofstra to Trask Coliseum on Thursday night, he’d held two practices under his belt since replacing C.B. McGrath, who was fired earlier in the week. 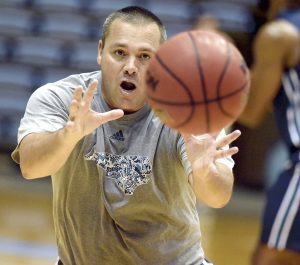 Interim UNC-Wilmington basketball coach Rob Burke exhorts on his team during a practice earlier this week. Burke replaced the fired C.B. McGrath with the Seahawks and has benefited well in the profession thanks to his basketball pedigree. Photo by Ken Blevins / Wilmington Star-News

The weary Seahawks had little time to process the firing of McGrath before Thursday’s contest against defending CAA regular-season champion Hofstra.

Despite the difficult situation, energy levels were high in Trask Coliseum Thursday night, and they radiated from the interim head coach. It brought with it a heightened intensity and determination during a 63-61 heartbreaker of a loss that somehow stood out from the rest in the program’s 12-game losing streak.

UNCW hosts Northeastern on Saturday night before heading into a three-game road stretch. Burke said he won’t accept anything less from his players than the energy they exuded on Thursday night. He set a team goal of finishing sixth in the CAA and understands it won’t be an easy task.

“Since I first taught him how to shoot a ball I’ve just watched him grow over the years, and this is another chance to watch him grow,” the elder Burke said. “When you know the business like I know the business, it’s a tough job he is taking.”

Rob spent his childhood in the gymnasium while his father coached at Chowan University — then Chowan College — in Murfreesboro, where he eventually played for him. Gattis Hodges, the longtime “Voice of Chowan University”, described a 10-year-old Rob as a basketball junkie, always at his father’s side during practices and team camps.

Bob was inducted into the Jim Garrison Hall of Fame in 2000 and left Chowan after 22 seasons with a 419-217 record, then the third winningest active coach in North Carolina history behind Duke’s Mike Krzyzewski and High Point’s Jerry Steele. His coaching career spanned five decades and included stops at the junior college, NAIA, NCAA Division I, II and III and NBA ranks. Twenty-five of his former players are now coaches, including Rob, Fred Vinson of the New Orleans Pelicans and Nate McMillan of the Indiana Pacers.

“Rob has been around these guys all his life and has made some of them better by drilling them, and by playing with them they made him better,” Bob said. “He has been in the gym with me since he’s been 4 years old and probably holds the record for most shots on Bob Burke court. He knows what success is.”

This season, UNCW stands 5-15 overall and 0-7 in the CAA and are in the midst of a 12-game losing streak. A team plagued by injury, two players also left the program earlier this season in graduate transfer Carter Skaggs and starting point guard Kai Toews. No one understands the uncertainties of the business better than Bob.

“He has had a wide variety of experiences that should benefit him as he tackles this thing,” Bob said. “It is a tough deal.”

Hodges watched Rob compete as a point guard at Hertford County High School. He also called games while Rob was in a Chowan uniform. Just before Rob’s time on the court, the radio personality said Rob has been through his own tough times as a player. Chowan transitioned from a junior college to a Division III institution, which meant no athletic scholarships, and the program went through growing pains.

Rob was a part of that rebuilding in the mid 1990s, helping keep spirits up on the court. He earned his Bachelor of Science Degree in Sports Management with a minor in Business Administration from Chowan in 1998.

“He is a big-time competitor,” Hodges said. “He knows the game. If the kids follow his personality, they are going to play hard. He was a grinder and got after it. He knew the game well and has good pedigree as a coach’s son.”

Rob arrived at UNCW in May 2017 as director of operations until he was promoted to assistant coach last season. He previously worked under former UNCW guard Mark Byington, the head coach of Georgia Southern, as the director of operations for two seasons and spent five seasons as an assistant coach at The Citadel to Chuck Driesell, who now coaches at Maret School in Washington D.C.

Before his arrival at The Citadel, Rob spent six seasons as the head coach of Spartanburg Methodist College, finishing with an overall record of 117-68. In the summer of 2008, he worked at the Nike National Skills Academy with former Seahawk Ganon Baker. Rob and his wife, Neily, have two daughters; Mina, 20, and Marissa, 10.

“Rob is a straight-shooter. He is always on the grind and looking for an edge,” Driesell said. “Everyday he showed up in my office ready to do whatever is necessary with recruiting to ordering equipment … He was a good assistant and someone that always saw the glass half full. This business can be a challenge, and I think that serves him well.”

(Permission was granted by the Star News to publish this story and photo.)

The newest inductees to the Rock & Roll Hall of Fame were announced this week, and six more musical acts... read more