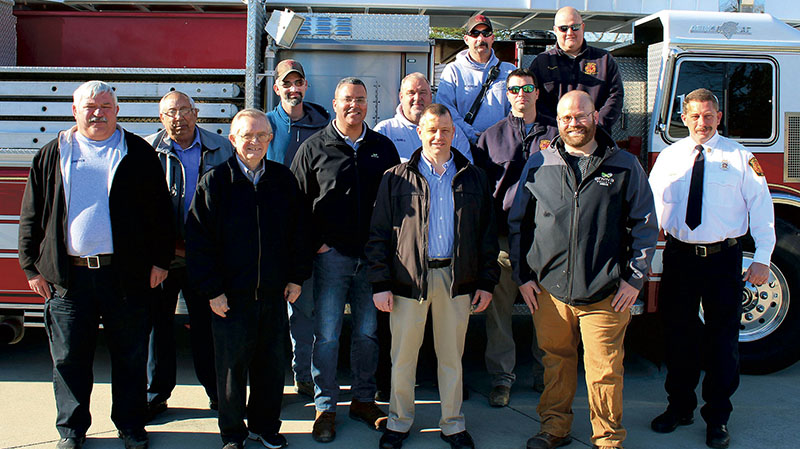 AHOSKIE – The Ahoskie Fire Department is taking the necessary steps to revise its charter to be classified as a Fire and Rescue unit through upgrades to its equipment and training.

Thanks to a $15,000 sponsorship from Enviva, Ahoskie Fire Chief George Michael Bradley is purchasing new equipment and setting up staff training schedules in order to earn a new title – Ahoskie Fire and Rescue Department.

“It will actually allow us to be more professional in our rescue operations,” stated Bradley. “We have always been more into the fire side of things. These days, you are seeing more and more fire departments getting more into technical rescue, vehicle extraction, which we do a lot of. This will make us better trained, better prepared.”

Bradley assembled a small group of firemen, city council members and designees from Enviva to pose for a photograph in front of the department’s newest fire truck, which features a 102-foot ladder, earlier this week.

After the equipment is onsite, Ahoskie’s five full-time firefighters and additional volunteer firefighters will undergo specialized training over the next six-to-eight months, working towards a “Fire and Rescue” designation.

At the conclusion of this training, the department will officially apply to the state of North Carolina to be evaluated in a timely manner. The state evaluates all departments based on their equipment and training experience. The goal is to have the charter officially changed within 12-14 months.

The partnership between Enviva and the Ahoskie Fire Department has been a strong one since Enviva first arrived in Ahoskie in 2011. As with other industry facilities in the area, the Ahoskie Fire Department serves as an onsite backup for Enviva when it is conducting various maintenance activities. Just several blocks from the Enviva facility, the department is also a first responder in the case of an accident and/or emergency.

The idea for this most recent sponsorship grew out of Enviva’s need to have a certified rescue team onsite for any maintenance that involved working in confined spaces at the facility. Currently, Enviva uses a third-party team.

Enviva’s EHS manager, Jared Wald, thought it made more sense to partner with the local fire department than rely on outside vendors. Wald first approached Chief Bradley back in May to inquire if the department had any plans to pursue a rescue charter.

“I called over and asked if they had any plans to change their charter so they could serve as a certified rescue team for confined spaces,” stated Wald. “After discussing a few things, it became obvious that some support would go a long way towards helping our operations, the Ahoskie Fire Department, and the community as a whole.”

The sponsorship seeks to provide all the essential equipment to complement the existing fleet of fire trucks and equipment at the station. Examples of equipment to be obtained include high-angle rescue equipment, tripod lifts, K12 metal saws, harnesses, and ropes.

Bradley, a 27-year veteran of the Ahoskie Fire Department, admits that while all of the equipment might not be perceived as high-dollar items on the surface, the equipment must be purchased from certified suppliers to meet all federal and state codes. This certainly raises the price of the items.

“Between the new truck and this donation,” stated Bradley, “it really has helped push us forward with something we have wanted to do for a while. We would not be in this position without Enviva’s support.”

Ahoskie Town Manager Kerry McDuffie believes the improved equipment and new training will not only earn the department a new charter, but it should also help the department jump up one or two spots in the ranking system. This ranking upgrade would not only be a point of pride for Bradley and his team, it would also translate to insurance premium benefits to area residents and businesses.

Other local industries, including Nucor Steel, are also assisting with the upfit of the Ahoskie Fire Department with donations this past year and possibly additional grants in 2020.