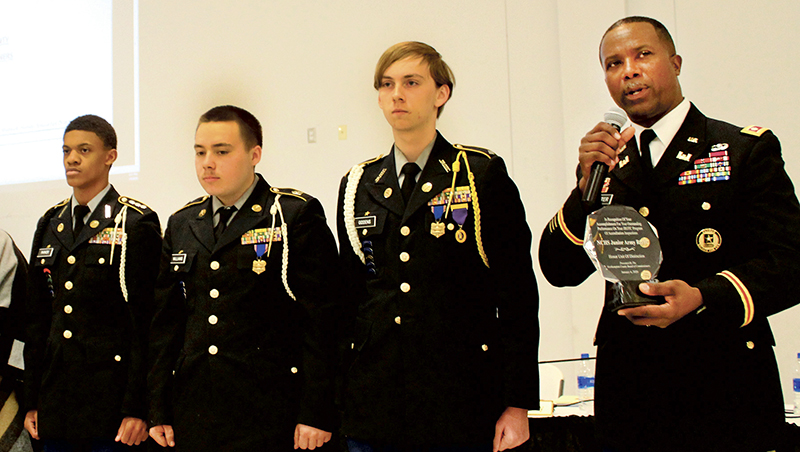 Members of Northampton’s JROTC program stand in recognition as Col. Will Ledbetter (right) thanked everyone for supporting their program, which recently was named “Honor Unit with Distinction.” Staff Photo by Holly Taylor 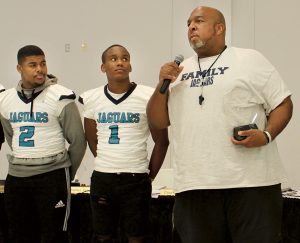 Head Coach George Privott (right) was joined by members of Northampton County High School’s football team as they were recognized by the Board of Commissioners Monday night for their run to the state championship game. Staff Photo by Holly Taylor

Commissioner Kelvin Edwards, who also serves as the Assistant Superintendent for Northampton County Schools, presented recognition plaques to each team.

The Northampton County JROTC program recently passed their accreditation inspection with 95.5 percent, earning them the title of “Honor Unit with Distinction” and a Gold Star to wear until the next inspection.

“What the Northampton County JROTC has done is phenomenal,” said Edwards. “They exceeded excellence as compared to other JROTC programs in northeastern North Carolina.”

Col. Will Ledbetter, who leads the JROTC program, thanked everyone for their support and spoke proudly of his students’ accomplishments.

“These young cadets work extremely hard to provide community service not just within the school, but throughout Northampton County and surrounding communities,” Ledbetter said. “To receive this award, it meant a lot. We work extremely hard with these students.”

“The Jaguars played for the state championship, and although they fell just a little short, we want to recognize them for being the eastern conference champions and being the 1A state runner-up,” he announced.

The team played the championship game against Robbinsville on Dec. 14 at Duke University’s Wallace Wade Stadium. They were the first team in the school’s history to make it to the final game. 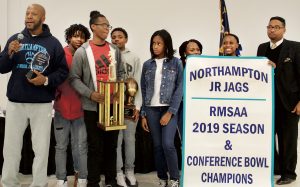 Head Coach Jeff Long (left), accompanied by some of the Northampton Junior Jaguars football team and cheerleaders, encouraged students to excel in the classroom as much as they excelled on the football field this season. Staff Photo by Holly Taylor

“They raised the bar on Northampton County football and student athletes,” said Head Coach George Privott as he stood alongside his team.

The final recognition of the evening went to the Junior Jaguars football team, comprised of students from both Conway Middle and Gaston Middle schools. Edwards noted it was the first time the two schools joined together to play football, and they went 8-0 to win the Roanoke Middle School Athletic Conference.

Head Coach Jeff Long jokingly compared the Board’s recognition as like being at ESPN’s Espy Awards. He spoke proudly of his football athletes as well as the cheerleading team which supported them every step of the way.

Coach Long also took a moment to encourage the students to continue to focus on their schoolwork as well.

“You can be a champion on the field and a champion in the classroom as well,” he said. “I really want you guys to succeed and achieve academically.”

Board Chair Charles Tyner, who served in the past as a principal in Northampton’s school system, also encouraged the students to do as well academically as they did athletically.

“Hit the books,” he said. “We have got to move from where we are to where I know we can be. We expect great things out of you.”