AHOSKIE – A political newcomer is banking on his “can-do” attitude and business management experience to earn the job as North Carolina’s next Lt. Governor.

Buddy Bengel is an entrepreneur from New Bern. He received a degree in Business Management and began his MBA at Quinnipiac University (Hamden, Ct.).

Bengel is the managing partner of the Morehead City Marlins and Baker’s Kitchen Restaurant and Bakery. He is the owner of Bengel Sports Marketing and Consulting and Beer Army Burger Company. His consulting work has ranged from sporting goods, including baseball footwear and apparel, for Spalding and 3n2 Sports to political campaigns, public relations, and speech writing. 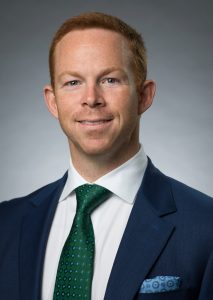 An athletic scholarship to play baseball at Quinnipiac eventually led Bengel on a professional career both in the United States and internationally in Italy.

He recently stopped by the Roanoke-Chowan News-Herald office for an interview regarding why he threw his hat into the political ring.

“We need statewide elected officials from eastern North Carolina because this part of the state is so often overlooked and forgotten about,” Bengel noted.

What makes Bengel so unique is the fact that he has never sought or held political office. That begged the question of what possessed him to run for Lt. Governor.

“A lot of my decision came from Hurricane Florence,” he said. “It dumped 8 trillion gallons of water on eastern North Carolina. It put New Bern and other towns and cities under water. People didn’t know what to do or where to turn. You have to create a starting point and that all begins with determining how can we meet the most urgent needs that you can handle.”

As a restaurant owner, Bengel’s quest to help others came on what he knew how to do best, stocking his food trailers and going out into the most severely impacted areas and offering hot meals to hurricane victims. That led, in some cases, to feeding as many as 1,500 people a day.

“We also open our restaurants to feed the teams of workers coming in from other states,” Bengel said. “We had the means and goods to do that, so we did.”

In the aftermath of Florence, Bengel chatted with current Lt. Gov. Dan Forest, who is seeking the office of Governor in 2020.

“He told me our state needed someone young and energetic to run for Lt. Governor, someone to energize the younger conservatives in our state,” Bengel recalled of the conversation. “And he told me we needed someone who understood how to come into the rural economies we find here in the east with ideas on how to create jobs and opportunities, and how to connect us to the rest of the state.”

The latter, as it turns out, is right up Bengel’s alley as businessmen know how to create opportunity.

His father – formerly a banking executive who lived in Ahoskie for a short period of time – owns and operates a roofing and sheet metal business.

He got into the restaurant business by chance. His family owned a building in downtown New Bern that was leased by a restaurant owner. On Dec. 23, 2011, that owner closed his doors unexpectedly and left town.

“I felt so bad for the people he employed; they were relying on the money they made to provide Christmas for their families and, bam, they were out of a job without any warning,” Bengel explained. “We tried to sell or lease the building for another restaurant, but there were no takers.”

Instead, Bengel and other family members rolled up their sleeves and opened Baker’s Kitchen and Bakery.

“We didn’t know one thing about running a restaurant, but that didn’t stop us,” he said. “Six months later we were turning a profit and we’ve done ever since. We’ve been very blessed and we’ve put 60 people to work through expansion over the years.”

That expansion includes the opening of Beer Army Burger Company.

“That’s a project I’m very proud of; it’s a salute to our military,” Bengel noted. “My business partner there is a retired Marine whose best friend was killed in Iraq. We also operate a non-profit through that business, helping military veterans with the issues they face, including PTSD.”

His business ventures also include athletics as Bengel is the managing partner of the Morehead City Marlins, a member of the Coastal Plains (baseball) League.

“I’ve played in that league,” Bengel recalled. “A lot of the inspiration I used to start-up the Marlins came from playing in that league.”

The Marlins began playing in 2005, originally in New Bern before the franchise was moved to Morehead City three years later.

“If you can succeed in a rural community, just like I’ve done, you can succeed anywhere,” Bengel stressed. “I value hard work and the personal responsibility that comes with it. Politics are hard; running for a statewide office is hard, but I believe my strong work ethic will see me through until the end.”

“Without the products they grow and sale, to include livestock, then where are the other jobs,” he asked. “They supply food to my restaurants and those of other restaurant owners. They supply the products that are made to put clothes on our backs. And we have a governor now that brings frivolous lawsuits against food manufacturers. That’s hurting farm families, not only the current day farmers, but the next generation of farmers. We need to be helping those young people see the value of agriculture in our great state.”

It’s his work ethic and the ability operate several successful businesses that led Bengel to believe he is the best candidate for Lt. Governor.

“Why should you vote for me….because I feel I have the ability to make your tomorrow better than today,” Bengel continued. “We need to make sure we are running a small and efficient government that gets out of the way of business owners, entrepreneurs and those trying to better their lives. The office of Lt. Governor is a prime opportunity for someone with an entrepreneurial spirit to become a salesman for the state of North Carolina.”

Bengel touts that North Carolina has one of the most affordable and accessible university systems in the nation that helps attract businesses to the state. He said he understands the importance of keeping higher education affordable is key.

“We must also continue to invest in our K-12 system so that we have quality principals, teachers, and support staff,” Bengel added. “More testing and bureaucracy will not solve the problem. Creating a professional environment for teachers and allowing innovative techniques to educate our kids will help our schools thrive.

“I feel I’m the best candidate; it’s not because I’m younger, rather it’s about what I’ve been able to accomplish thus far with my life. The younger generation needs to become involved,” the 37-year-old Bengel concluded.

As is the case in vehicle accidents, the fine line between life and death rests not in the hands of... read more