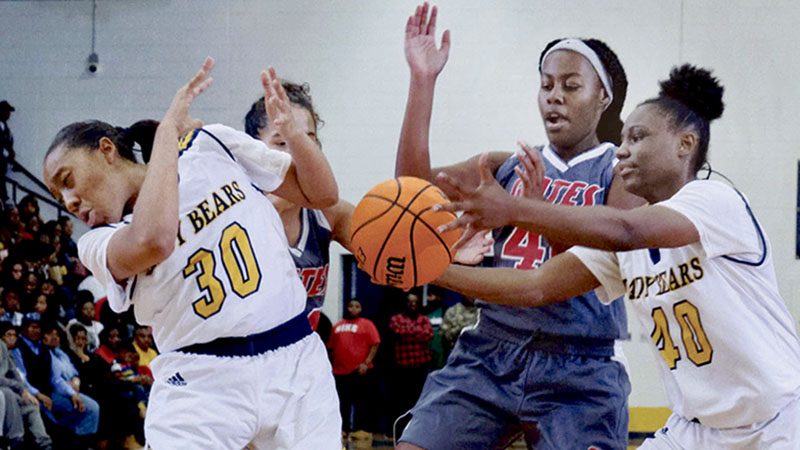 Hertford County High teammates Ashley Jenkins (#30) and Desiree Askew (#40) duel for a rebound with a couple of Gates County High players in the semi-final of the Roanoke-Chowan News-Herald Holiday Classic. The Lady Bears won 51-25 to advance to the championship. A.A. Imaging / Andre Alfred

Three of those wins came against Gates County.

The latest was the Classic semi-final on Friday night when the Lady Bears claimed a 51-25 victory.

After three ties and four lead changes through the first 12 minutes, Hertford County seized control and were never tested thereafter.

The Lady Red Barons forged a slim 10-9 lead after the first quarter and were ahead 11-9 early in the second before the Bears recouped and went on a 14-4 run powered by seven points from senior Mya Mabine. It gave Hertford County a 23-15 lead at the mid-break.

With a 7-0 outburst to open the second half, Hertford County had doubled up the ‘Barons, 30-15 before Gates began chipping away, scoring six of the final eight points of the third quarter to trim their deficit to 32-21.

But the Bears saved their best for last, scoring nearly 20 points in the final quarter and holding Gates to just a pair of field goals. The 19 point Bears’ effort was led by Desiree Askew with six points and four more from Mabine. It powered Hertford County (5-3) into the finals for the first time in eight years (2011-2012), which was also the last time they won the Classic.

The road to another title led through Washington County, which had ousted the Bears the last four years.

In the varsity boys side of the RCNH Classic, for the first time in eight years, both Hertford County High varsity basketball teams will play for the championship of the Roanoke-Chowan News-Herald Holiday Classic.

After watching the girl’s team dispatch Gates County, the boy’s squad came out and pounded Rocky Mount Prep on Friday night, 90-55, powering their way into the title game.

Of the nine Bears’ players that scored, five put up double-figures led by Daylan Askew and Quintin Wright with 17 points each.

Hertford County scored off the opening tip-off and never looked back from there.

Wright scored 13 of his team’s 25 first quarter points including knocking down three of the Bears’ four three-pointers, including the last three of the quarter. It was 25-8 when his last triple rattled through the twine, ending the first eight minutes of play.

Avery Hoggard, making his debut after missing the early games due to football season, had his coming-out with one of the five double-figure efforts. He opened the second quarter with the team’s first five points. This was followed by back-to-back-to-back three-pointers from William Valentine. Askew picked up the final five Bears points of the quarter, and both teams headed to the locker-room with Hertford County well in front with a 50-24 lead.

The Bears added 40 more points in the second half, but never reached a 40-point margin that would have run the clock the rest of the game. A 10-7 Rocky Mount run got their deficit down to 23 at 61-38. But Hertford County reeled off 10 of the final dozen of the third quarter for a 71-40 lead headed to the fourth.

By now, coach Charles Simmons just cleared his bench allowing nine of the 14 players who dressed out to score. The Jaguars were in a 36-point hole, 88-52 – their deepest of the game – before a late Jag three-pointer and Quadre Douglas draining the final field goal of the game for the Bears.

For the Bears, the road Hertford County (7-1) had to take next made its way through a Roanoke River town as the Bears faced Washington County in the championship game. Hertford County defeated the old Plymouth High School in 2011 and then got a forfeit win for the crown a year later.