COMO – George Worrell Evans, 92, of Como, NC passed away peacefully on December 19, 2019. He was born on August 25, 1927, to Inez Worrell Evans and Edwin Worrell Evans on the family farm in Maney’s Neck, North Carolina. George served in the United States Navy. After completing his service, George attended the University of North Carolina at Chapel Hill and later transferred to the University of Georgia from which he graduated with a Bachelor of Science in Agriculture. George was an active member of the Pi Kappa Alpha fraternity at both Chapel Hill and UGA, but it was in Athens, Georgia that he met the love of his life, Patricia Ann Deal, and George’s life was forever changed. George married Patty, his college sweetheart, on July 10, 1955, and brought her home to the family farm in Como where they raised their two sons, George Worrell Evans, Jr. and David Deal Evans. George farmed their land with his father, Edwin, specializing in peanuts, hogs, soybeans, and wheat. 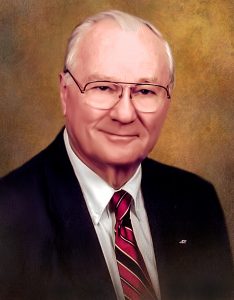 Many a friend or family member was a thankful recipient of George Evans’ country ham at Christmas time. George was also especially happy in his personal and expansive vegetable and fruit gardens, which he grew behind the family home. George will be fondly remembered by family and friends as a consummate Southern gentleman, a wonderful host, a great cook, and seldom matched raconteur.

In addition to farming, George pursued his interest in small business and started George Evans Men’s Wear store in Murfreesboro, and he opened HL Evans and Son Heating and Air. George was a member of the Masonic Lodge and he served as president of the Shriners Club of Hertford County. As someone with a deep appreciation for his roots and history in general, George was a lifelong member of the Murfreesboro Historical Association, as well as an active member of the Murfreesboro Coffee Club. For any leisure time he had, George preferred to spend it close to home with family and friends. He was a founding member of the Ebo Club on the Meherrin River where he could often be found on the weekends over the last 50 years grilling steaks, instructing on the best methods of how to bar-b-que, entertaining grandchildren, or cutting the rug to an old shag tune.

George was preceded in death by his parents, Inez and Edwin Evans; his wife, Patty; his sister, Jacqueline Evans; and his brother Edwin Worrell Evans, Jr.

In lieu of flowers, donations may be made to Barnes Methodist Church where the Worrell-Evans family has attended since its founding in 1803.

Garrett-Sykes Memorial Chapel is handling the arrangements for the Evans family and online condolences can be directed to the family by visiting www.garrettsykesfs.com.