SUNBURY – When he first sought political office in 2008, Henry Jordan vowed, in his words, “to ensure that Gates County’s government is more citizen friendly and its focus is on improving the quality of life for all county citizens.”

He lived by those words until drawing his final breath inside his Sunbury home on Friday, Dec. 20 following a two-year battle against ALS (Lou Gehrig’s Disease).

Jordan, age 71, served three, four-year terms as a member of the Gates County Board of Commissioners, with several of those years as chairman. He also served his native county as a spiritual and moral leader.

Funeral services will be held at 12 noon on Saturday, Dec. 28 in the Gates County High School gym.

His passing leaves a void among his peers within Gates County local government. 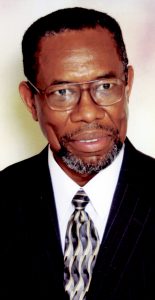 “He always came to our meetings prepared,” said Commissioner Linda Hofler. “I came onboard in 2012 and he showed me the ropes. He was such a kind and gentle man. Sometimes we disagreed, but we left it at the table; we were great friends. We respected each other’s opinions.

“It has been my honor and privilege to serve with Commissioner Jordan. He was a mentor and friend to me and a pillow of wisdom for the county. We are very thankful for his dedicated service as commissioner as well as the leadership he shared on other county and regional boards,” she added.

Jack Owens, vice chairman of the county commissioners, spoke of Jordan’s total commitment in his role of local government leadership.

“Henry Jordan was a true champion for the people of our county. Even in these past two years when ALS slowly eroded his motor skills, Henry never skipped a beat and rarely missed a meeting,” Owens said. “That alone speaks volumes about his commitment and dedication; character traits that will be sorely missed with his passing.”

“I consider myself a fortunate man to have shared the same commissioners’ table with Henry Jordan,” said Ray Freeman, the current board chairman. “Henry was very dedicated to the citizens of our county, particularly those in need of housing and DSS services. Perhaps what I admired the most was it was never about him, but rather what was best for the county. He served with honesty and distinction and stood tall until the very end.”

“Henry was dedicated to his role as a Gates County Commissioner. He fought hard for what he believed in and was always willing to help any citizen in need,” Commissioner Jonathan Jones remarked.

“Mr. Jordan was [board] chair when I was hired,” stated County Manager Natalie Rountree. “I appreciate the fact he, and the board at the time, was willing to give a person without true local government experience the opportunity to be County Manager.

“He had a wealth of knowledge that came from living in the county for many years and working with various groups,” Rountree continued. “I could always count on him having read the entire agenda packet before a meeting and sending corrections to minutes or calling to ask for more information or clarification. Mr. Jordan never wavered in his beliefs and commitments and for that I always respected him.”

“Gates County lost a devoted servant with the passing of Rev. Dr. Henry Jordan,” said Ray Felton, Chairman of the Gates County Board of Education. “Rev. Jordan has served the county with distinction and especially these last months as we watched him slowly go down physically and never show a sign of faltering in his determination to continue to serve the citizens of Gates County in spite of his ailments.

“Rev. Jordan’s commitment to Gates County and its citizens has always been apparent,” noted Felton. “He took pride in the renovations and construction we have had done these last couple of years. He helped make it possible.

“There has never been a doubt for any of us that his commitment was for the good of Gates County and he was not anxious to change his stand because someone disagreed with him. May he rest in eternal peace,” Felton concluded.

As an ordained minister, Jordan touched lives in other ways.

“I’ve known Henry for over 45 years,” Odom stressed. “He was a Christian gentleman, a great father and husband, a man of God, and a public servant in his role as a county commissioner. He was a competent leader in the ministry and in county government.

“He had such a presence about him and was a man of strong principals and values, a man of integrity,” Odom continued. “His vision for this county wasn’t wrapped in ego or personal gain. He was always so well prepared and well versed, and was never afraid to tackle the issues. I will miss my friend, and so will the people of Gates County.”

“He was a incredible leader in our community, serving as a pastor and as a county commissioner,” stated Rev. Robert Jordan, pastor at First Baptist Roduco. “He helped and served our county in many different ways. He was very instrumental in serving our senior citizens, always looking after their best interests, and serving the church community as a man of God.

“He was a basketball star at Central [High School] and then in college. We’ve lost a great man of faith, a great leader of our county, and a great friend to all,” Rev. Jordan added.

Henry Jordan retired from the Federal Government with over 30 years of service in January 2007. He held supervisory and management positions at the Norfolk Naval Shipyard, retiring as a mechanical engineer technician with the Supervisor of Shipbuilding in Newport News, VA.