Mr. Ayscue was born in Edgecombe County, NC on May 18, 1936, a son of the late Thomas and Daisy Askew Ayscue. After graduating from Rocky Mount Senior High School, Charles joined the U. S. Navy and served his country for four years. With an honorable discharge, Charles returned to Rocky Mount and joined the NC Highway Patrol Basic Training School in 1961. He was assigned to Hertford County, where he served until retirement after 25 years.

After retiring from the NC Highway Patrol, Charles went to work as a Corporate Safety Advisor for Perdue Farms, Inc. where he worked for 14 years. 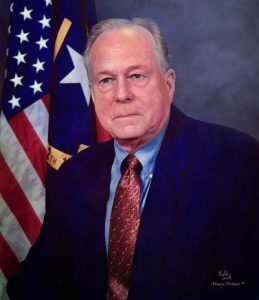 Charles was a loving family man and was a faithful member of Creech Memorial Baptist Church. He will be greatly missed by all who knew him.

Besides his parents, Charles was preceded in death by his loving wife of 42 years, Mary Anne Gupton Ayscue, an infant son, Charles Lee Ayscue, a brother, Sam Ayscue, and a sister, Joan Arrington.

The family will receive friends on Saturday, December 28, 2019, from 2:00 pm until 3:15 pm at Garrett-Sykes Funeral Service, Ahoskie, NC; followed by a celebration of life memorial service at 3:30 pm in the funeral home chapel, with Rev. Gary Medford officiating.

In lieu of flowers, the family requests that memorial contributions be made directly to Creech Memorial Baptist Church, P.O. Box 764, Ahoskie, NC, 27910; or you may donate online by visiting www.tmcfunding.com/search; then type Charles Ayscue.

Garrett-Sykes Funeral Service – Ahoskie Chapel is handling the arrangements for the Ayscue family and online condolences can be directed to the family by visiting www.garrettsykesfs.com.