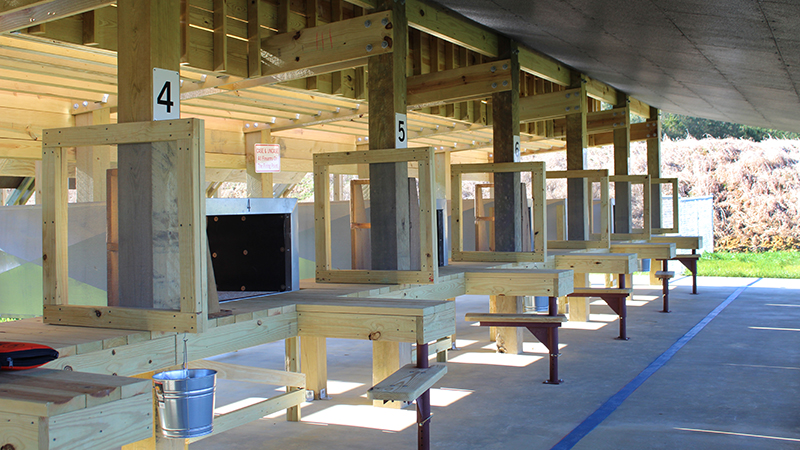 Shown here is just one small part of shooting stations located at the Odom Shooting Range, which officially opened Dec. 18 near Jackson in Northampton County. The facility is open to the public on Wednesday through Sunday. Staff Photo by Holly Taylor

JACKSON – Instead of driving hours to do target practice at a shooting range, residents of the Roanoke-Chowan area now have the option to do so a lot closer to home. The Odom Shooting Range officially opened with a ribbon-cutting ceremony on Wednesday, Dec. 18.

The project, which was made possible by a partnership between the NC Wildlife Resources Commission (NCWRC) and the NC Department of Public Safety (NCDPS), is the culmination of two years of designing, engineering, and construction. It’s located on Striper Lane, which is accessed via Bryantown Road about two-thirds of a mile southeast of Odom Prison.

“We’re happy to be here today,” said Erik Christofferson, who serves as NCWRC’s Deputy Director of Operations, as he addressed the crowd. “We’re tasked with providing outdoor-associated wildlife recreation. That’s part of what you’re seeing and witnessing here today.”

“We take that responsibility very serious,” he continued.

Christofferson explained the NCWRC oversees across the state over 240 boating access areas and hundreds of fishing areas, along with two million acres of game lands, four education centers, and now, several shooting ranges.

“It is fully accessible and free for the public to use,” he explained.

Christofferson also noted that the $1 million project was funded through Pittman Robertson Federal Grant Funds and the Wildlife Endowment Fund. NCWRC will staff the site with safety officers who will also be paid from these funds.

In his remarks, Christofferson also mentioned several benefits the range would bring for the area.

“This facility will allow children to learn how to handle firearms in a safe manner with their parents, and provide a place for recreational shooters to participate in their sport. It will allow hunters to prepare for the season,” he said, adding that it will also aid in lead reclamation efforts and reduce litter and random target practicing in game lands.

NCDPS officers will also be able to use the facility for training.

“Sites like this are very important to North Carolina’s outdoor heritage, our quality of life, and economic vitality. And we certainly hope this will bring some economic benefit to this region,” Christofferson said.

“We’re pleased and excited to see this wonderful project come to fruition,” Gossip said. “We view this as an economic development project in the sense that enhanced or increased recreational activities will create more economic vitality in the county.”

Gossip mentioned Backwoods Bait and Tackle, a store which opened in Jackson earlier this year, as one example of a business opening in response to the new shooting range as well as the boat landing planned for the same site which is scheduled to open early next year.

NC House Representative member Michael Wray was instrumental in helping NCWRC and NCDPS to partner on the project by bringing them together. The site was chosen because of an already existing small boat landing and private NCDPS shooting range at that location.

“It’s like quail,” Wray said, using a metaphor any hunter in the audience would understand. “At nighttime, quail come together, and during the daytime they scatter.”

“Nothing happens by itself,” he continued. “Working together works. We were able to put this puzzle together.”

Like others, Wray also mentioned the economic benefits of having a shooting range and the upcoming boat landing available in this area, noting that people from Virginia and other parts of North Carolina will spend money locally when they come to visit the site.

“I’m so excited about this for our community and for our citizens,” he concluded.

After the ribbon-cutting ceremony concluded, Wray took the first shot at the new range.

NCDPS Chief Deputy Secretary Tim Moose wasn’t able to attend the ceremony but said in a press release, “DPS agreed to partner in this important endeavor to allow the shooting public and law enforcement to hone their skills on a top-notch firing range. The project to improve and convert a practice range used by prison staff to one that benefits a variety of hunters and law enforcement officers is a win-win for everyone.”

Odom Shooting Range will be open to the public from 9 a.m. to 4:30 p.m. Wednesdays through Saturdays, and from 12-5 p.m. on Sundays. It will be closed on Mondays and Tuesdays.