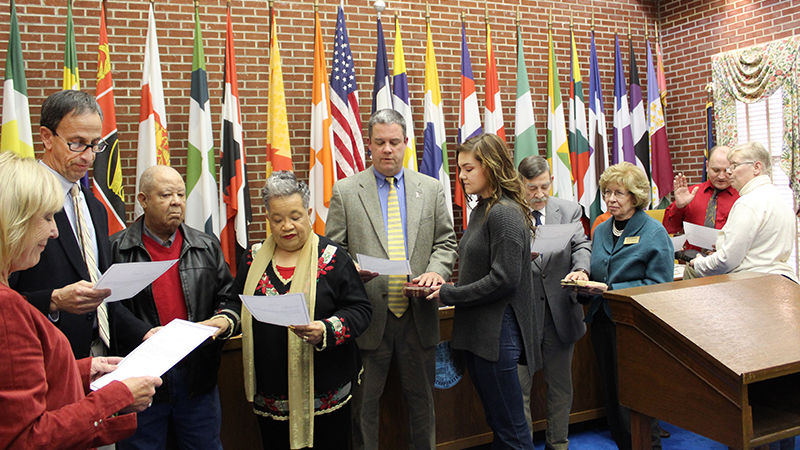 MURFREESBORO – The newly elected Murfreesboro town council and mayor were sworn-in at the beginning of their regular meeting here Wednesday, Dec. 11.

Returning for another two-year term were Mayor Hal Thomas and Council members Berna Stephens, Sarah Wallace, and Craig Dennis. They were joined by Jay Revelle and David Brown who are serving their first term on the council.

As usual practice at the first meeting with a new council, several housekeeping matters were taken care of first. Mayor Thomas appointed each member to a commission covering different aspects of the town.

There were two nominations for Mayor Pro-Tem, the person who will serve in place of Thomas if he is not available. After some procedural discussion on how to decide between the two nominees, the council voted between Stephens and Revelle by secret ballot.

Stephens secured the position in a 4-1 vote.

In other business, the council discussed the meeting schedule for the upcoming year.

Currently, the council meets twice a month on the second and fourth Wednesdays at 4 p.m. Brown suggested they push back the time for the second meeting so it would be easier for citizens to attend.

“If we have public hearings or things of great interest to the public, we could schedule those items for that day [the fourth Wednesday meeting], and they would have an opportunity to come,” he explained.

Stephens chimed in that she was a bit concerned about inconveniencing the staff and putting a burden on the town with the change, but also acknowledged the suggestion was worth considering.

“Can we maybe give it a run for six months,” Wallace asked, noting they could always reassess the meeting time later.

Brown motioned to keep the first monthly meeting at 4 p.m. and to change the second one to 6 p.m. for a six-month period. Wallace seconded, and the vote was unanimously in favor.

The council also voted unanimously in favor of giving employees Veteran’s Day off as well as their birthdays. That’s in addition to the holidays already approved each year.