WOODLAND – The town of Woodland conducted their monthly meeting here Dec. 5 with the changing of officials.

Mayor Randy Beale was sworn in by outgoing Mayor Kenneth Manuel. Newly elected Town Commissioner Ricky Morris and incumbent Commissioner Barbara Outland were sworn in by Mayor Beale, each for a four-year term.

Additionally, Police Officer Eddie Hoggard was promoted to Chief of the Woodland Police. 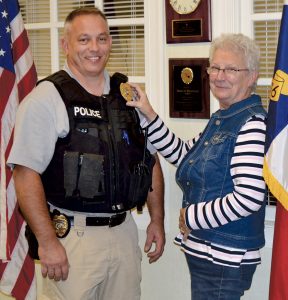 Manuel delivered his farewell speech. He expressed his thanks for the opportunity to serve the, “mighty town of Woodland.”

Hoggard was recognized and received his Chief badge. Outland, who serves as the Police Commissioner, remarked he has really proven himself.

“He has helped with problems at the Dollar General here in town, slowed traffic down, and is continually working on the drug problems,” Outland said. “He recently did a chase which resulted in a stop and seizure of drugs. The other Town Board members as well as I agree that he is deserving of this position.

“We are proud of what he has done and pleased with his job performance,” Outland added.

Hoggard wished to thank the friendly citizens of Woodland for their teamwork with the law enforcement agencies and their support of him. He said he has worked to slow the traffic by issuing 70 citations, many of which were warnings.

Hoggard was instrumental in getting approximately 17 of the town’s streetlights repaired. He wants to get several programs started to promote community togetherness with himself, other law enforcement officials, the town board and the citizens of Woodland.

The meeting has ensured the town’s citizens are in good hands with continual efficiency of town business and safety by these existing and newly elected officials.

Information sought on rash of robberies

JACKSON – The Northampton County Sheriff’s Office is seeking the public’s assistance in recent robberies that have taken place throughout... read more