His Jaguars – first team in Northampton County High School history to make it to the state championship in the consolidated era – couldn’t stop a determined Robbinsville Black Knights team led by Rylee Anderson. 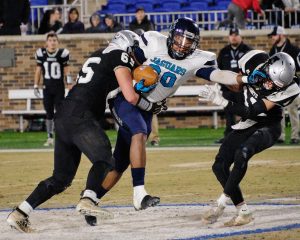 Trailing 14-0 at halftime, the Jaguars surrendered an early score to Robbinsville, but then got on the board for the first time with a pair of 3rd quarter touchdowns.

Starting at their own 37, the Jags picked up their initial first down of the game thanks to a penalty. They made it count, going from their own 41 to the end zone, capped by a Zion Kendall pass to Na’jae Newsome that made it 31-8 after a successful two-point conversion.

The Jags then recovered an onside kick at midfield and marched from the 49 to the end zone, set up by a 25-yard Kendall run as he escaped the grasp of Black Knight defenders. The drive was capped by Kendall then rushing 15 yards to paydirt, but a failed conversion left if 31-14.

That was as close as Northampton would come. Robbinsville, now with 14 state titles in the program’s storied history, added two more fourth quarter scores for the final margin.

“Hey, we took out the number one-and-two seeds in the East to get here,” Privott said. “I saw lot of our middle-school kids in the stands watching this game. They’re going to have to help us get back here next year.”