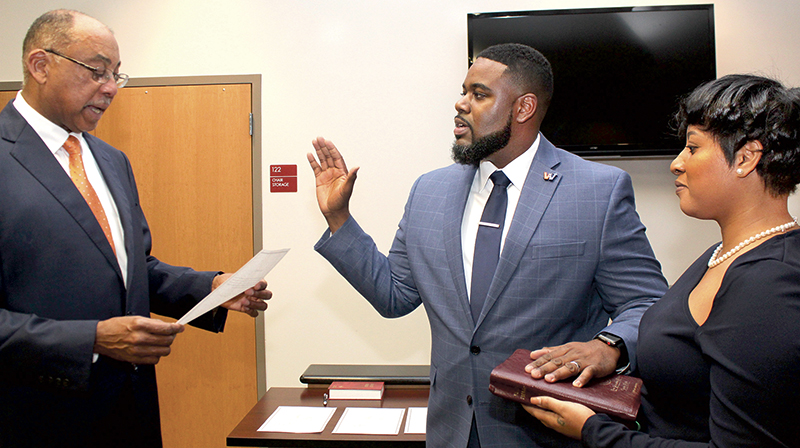 6B Judicial District Senior Resident Superior Court Judge Cy Grant (left) administered the oath of office to Weyling White on Dec. 10 prior to the meeting of the Ahoskie Town Council as wife Nikki White holds the Bible. White made history with his November election as the town’s first elected African-American Mayor. Staff Photo by Gene Motley

AHOSKIE – Weyling White says his commitment to his community runs deep, with roots stretching back to his birth.

White made history in November’s general municipal election when he ran unopposed and was elected the first African-American mayor in the town’s history. He was sworn in at the December meeting of the Town Council at the Ahoskie Fire Station; taking the oath of office along with re-elected Council members Matt Bradley and Charles Reynolds.

“No knock on anybody, but I never recalled seeing a black mayor when I was growing up,” White acknowledged. “Now, here I am in Walmart and a young kid turns around, looks at me and says, ‘Hey, Mommy, there goes the Mayor-man!’ Now I have to inspire the next generation and continue to carry this torch as we continue to lead.”

And the decision to seek the town’s top elected post had a lot to do with self-inspiration.

“I felt I was doing my community a disservice by not broadening out and trying to make an impact on our youth, bringing in businesses, and leveraging our relationships throughout the state,” he said. 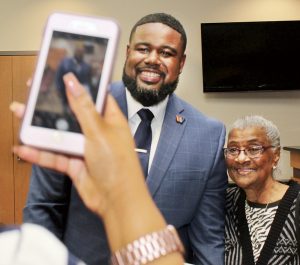 Brittany Jenkins snaps a photo of her brother, new Ahoskie Mayor Weyling White, and Ida Tyler during a meet-and-greet with citizens and supporters following the swearing-in. Staff Photo by Gene Motley

A lifelong resident, White was born and raised in Ahoskie, and attended Hertford County Public Schools before later graduating from Winston-Salem State University. He is also a lifelong member of Calvary Missionary Baptist Church, is married to Nikki White of Lewiston-Woodville and is father to three children, Christian, Savannah, and Johan.

White says his love for the community and its residents can be witnessed in his ability to see family and friends in every person he encounters.

“A lot of people mistook me for my Dad (who now lives in South Carolina) when I was campaigning because we have the same name and we both played basketball at Hertford County High, and I think some of them even voted for me thinking I was him,” he noted with a smile. “I built that name and started thinking if I’m not making a larger impact for Ahoskie, then what am I doing? That makes it a responsibility rather than just doing something.”

White says he respects the potential he sees for his community.

“I do want to bring the creativity and different projects and the best practices I’ve seen to carry us forward,” he added. “There’s just so much I want to achieve.

The town’s new chief executive also wants to meet the fiscal challenges he knows the town is facing.

“I know about debt,” he remarked. “I’ve lived through it, and I believe that we have to get creative, think outside the box and identify resources and existing resources that we can leverage, and we have to form relationships. There’re a lot of grants out there and in order to do what we need to do, we have to embark on something new and innovative. We have to re-brand our town and have an identity that attracts businesses and investors who want to come to our town and see some of the remarkable things we’re doing.”

After college, White returned to Ahoskie where he owned and operated a behavioral health company based in nearby Scotland Neck. Expanding his leadership role in the workplace, he joined the Roanoke Chowan Community Health Center (RCCHC) as Director of Hertford Health Access in 2013. He has continued to excel in Public Health administration as he looks for ways to improve the health of his community by now serving as the Practice Administrator for RCCHC.

“I may not have gone to school to be a (physician), but I can have ideas of how to work with doctors and health professionals,” he noted. “Helping others and being a servant has helped me with grant-writing and serving the under-served. What better way than to take this seat and bring these fresh ideas, expertise, and experience over to the town that raised me.”

Recently, White was appointed to the North Carolina Institute of Medicine and selected as a Bernstein Health Leadership Fellow for 2019-2021. He has some innovative and idealistic projects he wants to bring to his administration.

“I want our youth to learn life-skills,” he proposed. “I want to look at our money issues, are we spending too much for our patterns, or do we need to try something new and get some others to come here and help us figure it out. But that goes to a lot of people who have resources and who have ideas.”

“Let’s try to look at some of the best practices that are succeeding in other towns; work together with the county and the state and be diligent,” he said. “A lot of this is going to take a lot of hard work on our end, but there are resources that can assist us, organizations that can guide us to this work we need to get done. Let’s think about the best ideas for our town and how we can bring those things here.”

White lists his biggest accomplishment as returning to his hometown to make an impact in his community.

“I hope to inspire the next generation,” he declared. “I want to see more youth return home because I got criticized by some of my peers for coming back and who felt this was a last resort. But my passion for this town has always encouraged me that my calling is bigger. I prayed, I believed in God, and I always felt there was a reason that brought me back home and encourages me to stay.”

“I learned from my CEO at the Health Center something we practice called ‘failing forward’,” White said. “If we go out and we fail, we are at least learning from it. We’re going to have to have a new mind-set about traditional approaches. When I look at solutions and develop programs, I wonder what can we change, what’s fresh that we can do. I’m not an expert. I have to learn from the community. Even though I’m up here on this dais making decisions, I want to know more, too.”

And, while it’s a cliché of civic responsibility, White says he also wants transparency during his term.

“That’s one of the reasons I wanted a layer of time,” he explained. “I have to go to the community to get feedback. We have to engage the people with these ideas. This may seem like it’s the (Town) Council’s community, but it’s everybody’s community. We all have to take ownership.”