EURE – Depending on the ferry schedule, it takes approximately five hours to drive from White Oak Road in Gates County to Ocracoke Island.

However, the two dots on the map are connected much closer when it comes to the heart.

On Saturday, a record 270 individuals visited A & W Outback, a tiny oyster bar located in the backyard of Ann and Wade Askew. The couple has hosted numerous fundraisers before, but nothing of the magnitude experienced on a crisp, early December evening that witnessed vehicles parked on and off the property.

Those attending came in search of the typical great food found at A & W….fresh oysters and shrimp, steamed to perfection, along with chicken wings, pork barbecue, Hatteras style clam chowder, meatballs, cheese, and peanuts. But there was another reason behind this meal fit for a king….the love and support of Gates County native Hardy Plyler to help he and other fishermen on Ocracoke Island recover from the devastating effects of Hurricane Dorian. 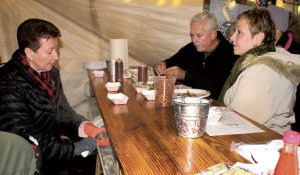 That storm made landfall on Sept. 6 at Cape Hatteras. As the eye of the hurricane moved north of Ocracoke and the wind changed direction, water from the Pamlico Sound came flooding across the island. The water rose seven feet in two hours, flooding many homes and businesses.

Among the flooding victims was Ocracoke Seafood and a community fish house, owned and operated by the nonprofit Ocracoke Working Watermen’s Association (OWWA). Among the damage there was the loss of its ice house, a facility key to the commercial fishing industry, as well as retail space.

Plyler grew up in Gatesville. He graduated from Gates County High School in 1968 and then from UNC-Chapel Hill where he was a Morehead Scholar. Of all the business opportunities afforded to an individual with his prestigious educational background, Plyler moved to Ocracoke in 1972 and became a fisherman. He also now manages the OWWA fish house and was part of an effort to save it, the last remaining type of facility on the tiny island.

“Ann and myself have known Hardy for a long time,” said Wade Askew. “We visited with Hardy and his wife, Patty, a couple of times this past summer. That was before the hurricane hit Ocracoke and they had all that damage there.

“God put it on our hearts to help Hardy and the other fishermen there who lost their fish house,” he continued. “Without it, they have to burn a lot of gas and spend extra time taking their catch to other locations. Plus they went through so much effort to form their nonprofit to save the last fish house on the island. It’s important to their livelihood.”

After covering the expenses of staging Saturday’s event at A & W Outback, the Askews wrote a check for $17,600 to the OWWA. That money, plus other funding the nonprofit has been able to generate, that includes an $8,000 Rapid Response Grant from the Outer Banks Community Foundation, will be used to repair the storm damage to the fish house.

“It was so wonderful to see our local community – from right here in Gates County plus those from our neighboring counties – come out to support the OWWA,” Askew stated. “They poured out their hearts to help someone in need.”

“Hardy and I were overwhelmed by the love and support we felt at the oyster roast. It made me cry,” she said.

Mrs. Plyler connected the sandy shores of Ocracoke and the fertile soil of Gates County, saying the two places, while different, are so much alike. 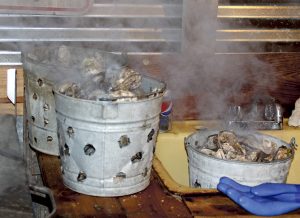 Freshly prepared oysters emit steam as they wait to be carried to the hungry throng of ticket-holders at the event held at A & W Outback. Staff Photo by Cal Bryant

When the discussion again turned to Saturday’s fundraiser, she cited a recent quote made by the Ocracoke Disaster Relief Team: “The road ahead is long and difficult. With support of the Ocracoke community near and far, we will rebuild.”

“That so appropriately sums it up as we will rebuild thanks to our own grit and determination as well as the support from others like Wade and Ann Askew and all those who supported their fundraiser on Saturday,” she said. “We face very costly repairs. The flood washed away the floor of the fish house and all the display cases were damaged, as well as the damage to the ice house.”

Since arriving on the island in 1972, Hardy Plyler – who said he grew up fishing in Merchants Millpond as well as enjoying the rite of spring on the Chowan River during the annual herring run – has witnessed turbulent times before in the North Carolina commercial fishing industry, to include weathering storms and the devastation they leave in their wake.

“The Ocracoke Seafood Company provides a connection to the island’s past, but also a living expression to the spirit of the island’s current residents who endeavor to preserve a local resource and a viable way of life for the working watermen of the island,” said Hardy Plyler. “It also preserves a maritime heritage that benefits everyone on this island. It’s a community based business.”

As to the efforts of the Askews to ensure that heritage remains, Mr. Plyler remarked, “They’re amazing people, Wade and Ann. It was awesome what they did for us. We’re very appreciative of this fundraiser.”

In 2006, the real estate values on Ocracoke were soaring. As a result, the last fish house on the island was put up for sale. This would have been devastating to the fishermen of the island and a maritime way of life for over 300 years. Plyler banded together with other Ocracoke fishermen to form the Ocracoke Foundation, a 501(c)(3) non-profit. After securing several grants, the Foundation was able to sign a long-term lease on the fish house and improve the property’s infrastructure.

And thanks to the efforts of Ann and Wade Askew, and their 270 guests on Saturday night, that well-known tradition of fresh seafood in Ocracoke will remain intact, and so will the heritage of this tiny speck of sand surrounded by water.