“The first time we played them this year we lost 46-28, and we were missing three starters,” said Jaguars head coach George Privott. “This time they all played in the game and it made a difference.” 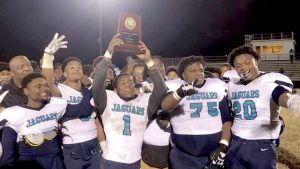 “We got an early lead and were ahead the rest of the way; then we had an interception return for a touchdown and that sealed the win,” he said.

On the way to the state championship game, the Jaguars beat the two top seeds in the 1A East bracket, and both on the road.

They beat number-one seed Rosewood in Goldsboro, 26-20; the same team that had knocked Northampton out of the playoffs a year ago. Then they beat two-seed North Edgecombe in Leggett, 20-12. The Warriors handed the Jags one of their three losses this season.

Northampton is now headed to the 1A state championship game on Saturday in Durham at Duke University’s Wallace Wade Stadium. Kickoff is set for 3 p.m.

The Jaguars (11-3, second in the Three-Rivers Conference) will face undefeated Robbinsville (14-0, Smoky Mountain Conference champs) in the 1A title game.

Northampton County High will be making its first appearance in the title game. The old Northampton-West High played in the 2005 state championship, falling to Elkin, 42-12.

Robbinsville will be making their 16th appearance and have a record of 13-2 in state championship games. Their last appearance was in 2015 when they lost to Plymouth, 28-20.

“Robbinsville is undefeated and they are very athletic,” said Privott. “They have a good quarterback and good running backs. They are sound both offensively and defensively.”

“We must protect the ball, limit turnovers, and play well offensively and defensively,” closed Privott, whose team will be looking for their eighth straight win.

The place where brains and athletic talent meet head-on