AHOSKIE – It was Ridgecroft School against Pungo Christian Academy in the girl’s championship game of the 14th annual Lt. Nick Brantley Scholarship Tournament.

Despite Pungo having won five straight times since the two met in the 2018 Brantley girl’s final, the Lady Rams were looking for a repeat in defending the title they secured a year ago.

The 2019 format featured no consolation game, so it was win-or-go-home in the Thursday night semi-final.

Ridgecroft took that with a 10-point victory, 49-39, over rival Northeast Academy. 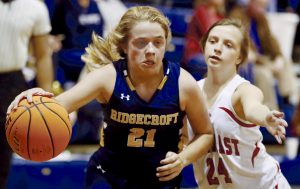 Brooke Rose, held to just five points in the opener – won by Ridgecroft 53-49 in overtime – exploded for 14 points against the Lady Eagles, a dozen of them coming in the final three quarters.

The Lady Eagles went on a 10-0 run in the early going, before the teams swapped the lead back-and-forth. Ridgecroft tied it 11-11 on a Leah Woodard basket and at the end of the quarter,13-all, on a put back by Courtney Taylor.

The Rams jumped up by five early in the third, but Northeast caught up and tied it 29-29 midway through the quarter. Later an Allie Liverman triple gave the Eagles their last lead, 34-33, before the Rams went up 37-34 headed to the fourth.

The Rams ramped up the defense in the fourth, nearly doubling up NEA 12-5 in the final frame. Ridgecroft built a lead of as much as 13, before Jessie Martin – who led all scorers with 15 points – nailed a three-pointer before the buzzer. The win sent the Rams on to their date with Pungo in the title tilt.

In the boy’s varsity semi between Ridgecroft and Southampton, the Rams led 9-5 after the first quarter, but the Raiders opened the second stanza on an 11-0 run and never looked back. They were up by nine, 24-15, at halftime; outscored the Rams 18-to-7 in the third to lead by 20, 42-22, before going on to win 51-37. Southampton faced Pungo in the boy’s final – the second meeting between the two after the Southampton Raiders won the Lawrence Academy Shootout back in November.