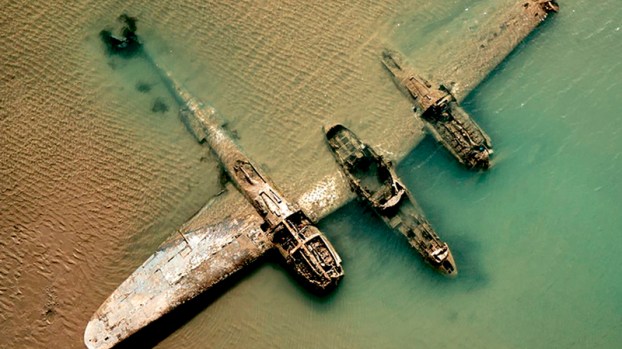 The wreck of the WW2 American P-38 pictured here is the best preserved military-aircraft crash site in Wales ― and it has now been listed for official protection by the Welsh Government. Photo by Joseph Mearman, SCSEE, Bangor University

WALES, UK – Second Lt. Robert F. Elliott of the U.S. Army Air Force was only 24-years-old when the P-38 aircraft he was piloting in 1942 crash landed off the northern coast of Wales during World War II.

Elliott, a Rich Square native whose family’s history is deeply entrenched in military service, was able to walk away from that crash. However, several months later, Elliott and his plane were reported missing. Both remain that way 77 years later.

But it’s Elliott’s first crash in Wales that recently drew attention there by the Welsh government. The Cadw (a Welsh word meaning “to keep”), the country’s historic environment service, has designated the crash site and the remains of Elliott’s P-38 as a protected area. 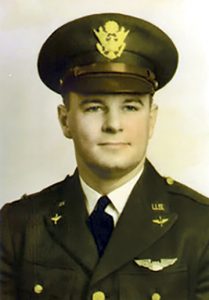 As fate would have it, the official recognition of the protected status came on Nov. 11 – Veterans Day in the United States, a date celebrated in the United Kingdom as Remembrance Day.

With its scheduled, or protected, status, the fighter is the first legally designated military aircraft crash site protected for its historic and archaeological interest in the United Kingdom.

According to the Cadw, which looks after all the historic sites in Wales (of which there are hundreds) – from castles to abbeys and Roman amphitheatres and Neolithic burial chambers – Elliott was flying a gunnery practice mission out of Llanbedr in September of 1942 when his plane encountered difficulties and crashed.

The Lockheed P-38 Lightning Fighter is buried beneath 6.6 feet of sand. The ghostly remains of the plane, however, sometimes appear from the sands – the first sighting was in the 1970s, according to Cadw. The plane was also uncovered in 2007 and, most recently, in 2014.

The aircraft is rare, comprising one of only 28 airframes known to survive from the 10,038 built; and deemed as the oldest surviving US Army Air Force combat aircraft of any type; the sole surviving ‘F’ model to have seen operational service in Europe during World War II.

The P-38 was used for interception, dive bombing, level bombing, ground attack, night fighting, photo reconnaissance, radar and visual pathfinding for bombers and evacuation missions, and extensively as a long-range escort fighter when equipped with drop tanks under its wings.

Welsh Deputy Minister for Culture, Sport and Tourism, Lord Elis Thomas, said, “This site is of international significance and I’m delighted that this designation underlines its special qualities as well as protecting it for the benefit of future generations. Wales will always remember and respect all those who contributed to securing the peace we are so fortunate to enjoy today.”

Matt Rimmer, a Welsh aviation historian, stated, “I’ve been an advocate for the preservation of historic military aircraft crash sites in Wales for over 20 years I’m thrilled to see the Harlech P-38 scheduled as an historic monument by Cadw, as I feel it not only acknowledges the significance of this particular aircraft in a historical context, but also the important role played by Wales in the air war against Nazi Germany and the thousands of aircrew from many countries who trained here, many of whom lost their lives either in accidents during training or subsequently in combat.”

Robert “Bob” Elliott, the nephew of the World War II pilot, was contacted about the protective status of his uncle’s aircraft. He had previously visited the crash site in 2016.

“I am honored and delighted that Cadw has given official recognition of my uncle’s P38F as a scheduled Ancient Monument,” said Elliott, retired from the US Navy now living in Kingsport, Tennessee. “My uncle, whom I’m named after, was among those brave and expert fighter pilots who served with distinction during WWII. My visit to the site with my wife Cathy in 2016 was very moving and emotional.

“The 49th Fighter Squadron, to which this aircraft was assigned, has a rich and storied history dating back to 1941 and is still active today as the 49th Fighter Training Squadron. I look forward to returning to Wales and offer my support of this historic designation,” he added.

Contacted by the Roanoke-Chowan News-Herald, Bob Elliott shared many details about his uncle and the Elliott family. His uncle enlisted in the regular Army in 1937 and went to Fort McClellan in Anniston, Alabama for basic training. While stationed at Fort Bragg, North Carolina, he enlisted as an Aviation Cadet in the Army Air Corps on July 29, 1940.

“He was shot down one other time prior to his MIA (Missing in Action) designation after being shot down again in Sidi Nsir, Tunisia on Dec. 5, 1942 and was never found,” Elliott noted. “Years ago I went to Tunisia on a church missions trip and visited the American National Cemetery there. There’s a memorial wall at that cemetery and my uncle’s name is on that wall. I was also able to meet three pilots who all flew with my uncle. All of those men are now deceased.”

The Elliott family traces its roots back to Northampton County since at least 1710, the birth year of Bob Elliott’s great, great, great, great grandfather, Elias Elliott. Those early ancestors were Quakers who farmed the fertile soil of the Rich Square area. As many Quakers did during the Civil War, the Elliott family took part in the famed “underground railroad” that helped escort slaves to freedom.

“Our farm back then was very large, and typical of farms in that region, raising cotton and peanuts,” Elliott said. “My uncle was born in 1918 and graduated from Rich Square High School, as did my dad. He also attended NC State, then called State College. He and my dad spent some time each summer in Winston Salem with my great aunt, Olivia Hall. When Lindbergh flew across the Atlantic, his interest peaked in aviation. Aunt Olivia paid for his flight lessons and he soloed soon after, eventually joining the Army and then enlisting in the Army Air Corps.”

By 1942, Robert Elliott was a flight instructor at Luke Field, training pilots. Word came down that a new squadron was being formed at Hamilton Field in California just north of San Francisco.

“My uncle and others volunteered to fly P38’s, the hottest fighter ever built at that time. Training was done there from early spring 1942 until July of that year,” Elliott shared.

He added that his career in the Navy was heavily influenced by his family’s commitment to serving their country.

“Two of my uncles on my mother’s side served in the Navy, one spent 28 months in various Japanese POW camps after his submarine was sunk in enemy waters in April 1943,” Elliott stated. “The other uncle was an aviation electronics chief aboard aircraft carriers. My dad also contributed to the war effort as a machinist tool and dye maker in Baltimore, Maryland, where I was born. He didn’t know it until after the war when he received a citation from President Truman stating that he had machined some parts for the Atomic bomb.”

Bob Elliott applied for a Navy contract officer program at the University of Virginia in Charlottesville.

“I was commissioned an Ensign in June 1966 and served aboard the USS DEALEY (DE-1006) in Newport, RI,” he said. “I left active duty in 1968 and continued to serve in the Naval Reserve for 24 more years, retiring in 1992 as a Captain. I worked for Eastman Chemical Company as a registered professional mechanical engineer.

As for his early children, Elliott remarked, “My dad moved us from Baltimore in 1953 to Rich Square and we stayed there for three years. He got a great job as a tool and dye maker at Sperry Rand Corp in Charlottesville VA in 1957 and we moved to Virginia.”

Bob Elliott was born in October of 1943, roughly 11 months after his uncle’s plane was shot down the final time.

“To have this site in Wales dedicated to my late uncle’s honor and to have it preserved forever means a lot to me personally and to my family. I thank the Welsh government for all they have done to protect and preserve this site,” Elliott concluded.

A number of local political leadership seats will be up for election next year across the Roanoke-Chowan area and the... read more