Davis’ election took place at the Association’s annual conference in Pinehurst in August. He is currently serving his second four-year term on the state board and has been with the Bertie County ABC Board for over a dozen years.

“In a time when the state ABC system is undergoing modifications and faces the threat of privatization, it’s an honor for me to be leading this organization,” Davis said recently.

The Association is not a part of the North Carolina ABC Commission itself. It is a separate trade association whose members include many of the local ABC Boards spread throughout the state.

The state ABC Board traces its roots back to the 1930’s shortly after the General Assembly repealed Prohibition and permitted the citizens in 18 counties to vote on the question of whether to allow the controlled sale of liquor. As a result, local ABC boards were created, and in 1960 the group formalized its organizational structure and incorporated as a non-profit corporation. It has now grown to a statewide association with over 175 member ABC Boards. 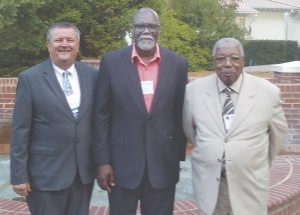 “I’m the first person from Bertie County to ever hold this position,” Davis added. “It’s also allowed me to represent counties with only one or two stores, because we haven’t been represented in a while.”

Bertie County has just one ABC facility, located on US-13/17 south of Windsor. After expenses, taxes, and surcharges, the county’s law enforcement gets a portion of the profits, mandated by state statute; while the other portion is contributed to the county’s General Fund.

Davis wants smaller stores to have access to some of the “higher end” spirits that have usually been reserved for the larger markets like Raleigh, Wilmington, Greensboro, and Charlotte, and their availability is distributed by allocation.

“It used to be little stores didn’t get those kinds (of liquors),” he noted. “But now every small store is going to get it just like the larger ones. I just want to level the playing field for small stores.”

Davis pointed out that two of the state’s larger counties (Wake and Mecklenburg) generate an estimated $10-$20 million to their local governments.

“But you also have to realize they have bigger outlets with restaurants, sporting events, etc., where the distribution of alcohol may be different, but it’s still controlled,” he noted.

“There aren’t as many facilities that sell what we used to call ‘liquor by the drink’,” he observed. “But if you went into an ABC store in Bertie County and bought a bottle (of alcohol), it’s going to be the same price in Mecklenburg. Prices are set by the state ABC Commission.”

In addition, Davis has other objectives he’d like to see more local ABC boards take an active role in, particularly with alcohol education for teens and young people.

“Bertie County does a great job with this in our school system, with help from the Department of Public Safety,” Davis acknowledged. “And I’ve already looked into doing this on a statewide basis. Farm Bureau Insurance has promised us $10,000 seed money to aid with the project.”

“But my main objective is to teach that (alcohol) is a substance that can be abused but can also be handled safely,” he said. “Also, I want to educate our young people about the effects of alcohol, and get small rural areas like Bertie, Hertford, and Gates counties a fair shake.”

WINDSOR – Just an imaginary scenario …. There’s a terror threat of some type at a school or in a... read more