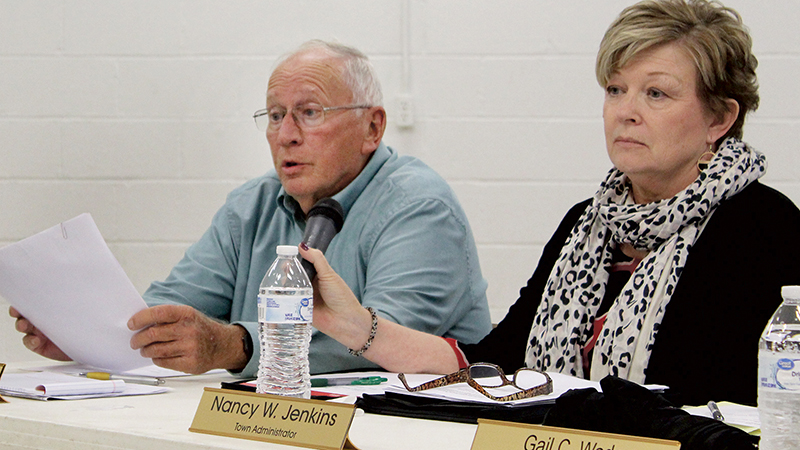 Conway Town Administrator Nancy Jenkins holds the microphone for Mayor Tommy Barrett while he makes remarks at a Nov. 18 joint meeting between town officials and the Northampton County Board of Commissioners. Staff Photo by Holly Taylor

CONWAY – Continuing their goal to visit every municipality in the county, the Northampton County Board of Commissioners held a joint meeting with the Conway Town Board in the town’s fire department building on Nov. 18.

“We believe that we can do better when we all work together,” said Commissioners’ Board Chair Charles Tyner as he opened the meeting.

Tyner briefly summarized the county’s ongoing water system expansion efforts, some parts of which will include residents living near Conway, Severn, and Pendleton. He said it would be an estimated six to eight months before they start laying down the water lines.

But most of the focus of discussion, however, was concerning first responders of the volunteer rescue squad and the fire department.

“The main issue the Town of Conway would like to work with you commissioners on is the rescue squad,” said Conway Mayor Tommy Barrett.

Specifically, Mayor Barrett said the building housing the rescue squad is too nice to waste, and asked if the county’s EMS service could perhaps use the building. He said the Conway/Severn rescue squad was still technically functioning, but he did not believe that would continue much longer.

The mayor also noted the town had decided not to budget any money for the rescue squad for this current fiscal year because of their lack of response to emergency calls. The Northampton Commissioners chose to do the same thing back in September when allocating annual funding to each fire department and rescue squad in the county.

As previously reported by the News Herald, the commissioners weighed the decision and ultimately decided not to allocate funds to Conway/Severn EMS this year because of lack of response to emergency calls. They had only responded to seven percent of calls in the past year. They noted at the time Northampton County’s EMS service would continue to provide coverage to that area of the county.

In response to Mayor Barrett’s request to consider the building at the November joint meeting, Tyner said the Board would definitely discuss it. He also said they would have to speak to USDA, who originally provided funding for the building.

“We’ve got to work out some logistics,” he said.

After discussion between the two boards concluded, Tyner opened the floor for questions and comments from Conway citizens. Joe Flythe, a member of the Conway Volunteer Fire Department, spoke up to request more funding from the county.

“We’ve had to step up our game,” Flythe said, explaining their department had been responding to more calls lately to cover what the rescue squad hadn’t.

“You didn’t appropriate them any money. We’re asking if we can get some of that money because the fire department stepped up,” he said.

Other citizen comments included topics such as natural gas, recreation options, and school safety. Tyner said the Board would consider the concerns and requests.

The commissioners have previously held joint meetings in Seaboard, Rich Square, Woodland, and Garysburg. They have not yet announced when and where their next joint meeting will be held.