As Santa Claus prepares for the busiest time of the year, he took a break from his schedule to speak, via telephone from the North Pole, with reporters at Roanoke-Chowan Publications. The Jolly Old Elf said he needed our help with the millions and millions of letters he receives each year from all the little boys and girls.

Due to a heavy volume of mail at the North Pole Post Office, Santa solicits the help of newspapers to serve as an outlet for these letters. With that in mind, The Roanoke-Chowan News-Herald and Gates County Index will accept “Letters to Santa.” We will publish those letters and then forward them to Santa in order for him to properly load his sleigh with gifts for all the good little boys and girls. 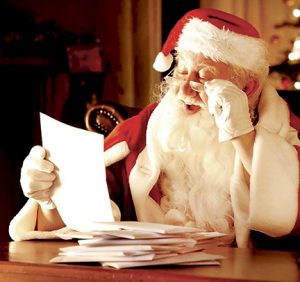 Roanoke-Chowan area children can send their letters to the following address: Santa Letters c/o R-C News-Herald P.O. Box 1325 Ahoskie, NC 27910 Be sure to include your name, age and hometown on the letter.

In addition, we have set-up a special email address for Santa letters. Those can be sent to santa.claus@r-cnews.com. Please have emailed letters sent to us by Friday, Dec. 6 so we can forward them to the North Pole.

We will begin accepting letters immediately. Individually submitted letters need to mailed or dropped off at our office no later than 5 p.m. on Monday, Dec. 2. That will give us plenty of time to forward them to the North Pole.

Also, for school classes that submit letters from each student, please have your “wish lists” to the News-Herald/Index office in Ahoskie no later than 5 p.m. on Monday, Dec. 2.

All letters will be published in a special Christmas Greetings section. That section will be inserted into the Thursday, Dec. 19 edition of the Gates County Index and the Saturday, Dec. 21 edition of the Roanoke-Chowan News-Herald.