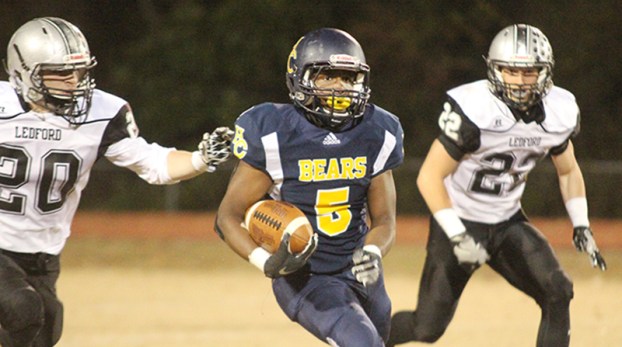 Hertford County’s Erion Holley (#5) eludes a pair of Ledford defenders in Thursday night’s NCHSAA 2AA playoffs. Holley finished with 161 yards rushing as the Bears topped the Panthers 28-7 to advance to the second round. Staff Photo by Cal Bryant

AHOSKIE – Tye Saxby threw for 120 yards and three touchdowns as Hertford County returned the favor of eliminating this year the team that did the honors to them last season; all thanks to a 28-7 Bears win in a game played on Thursday to avoid Friday’s rains.

It was opening round of the NC High School Athletic Association 2AA playoffs.

Clinging to just a 14-7 lead midway through the second quarter after the Panthers had just scored, Amajhea Smallwood helped turn the game with an 80-yard kickoff return that set the Bears up in the shadow of the Ledford goal line and once they scored for a two-touchdown lead, they never looked back from there. 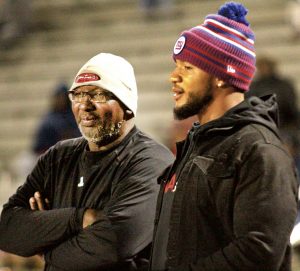 Hertford County scored on their opening drive, going 79 yards in 14 plays, capped by an 11-yard scoring strike by Saxby to Armand Vinson. Alden Lassiter added the PAT kick and it was 7-0 Bears with 6:57 left in the first quarter.

Ledford went three-and-out and punted, placing Hertford County on their own 32 yard line to begin a 68-yard drive. Once more, the Bears went to the air, Saxby this time hitting Erion Holley in the flat on a short four-yard catch resulting in the home team’s second score of the night and it was 14-0 at the end of the first quarter.

After short drives by both teams stalled, Ledford got on the scoreboard starting near midfield and driving it in from 53 yards out in six plays to make it a 14-7 game early in the second quarter.

On the ensuing kickoff, Smallwood electrified the crowd as he cut to the outside as the Panthers seemed to outrace their own coverage. From there it was all speed down to the Ledford 11-yard line.

On the first play after the run, Saxby zipped a pass to Avery Hoggard into the end zone for the score and a 14-point Bears lead making it 21-7.

Both defenses stiffened for the remainder of the quarter and the Bears went into the mid-break with a two touchdown lead.

Ledford got the opening kick of the second half, but were unable to muster anything offensively. Both teams struggled to gain ground – on the ground, or in the air the remainder of the third quarter and it was still the Bears up by 14 headed to the fourth.

Hertford County scored its final touchdown with 2:15 remaining in the game when Hoggard picked the Panthers quarterback at the Ledford 20-yard line and sprinted into the end zone for a pick-six and the last nail in the coffin.

Ledford seemed rattled after that, fumbling the ensuing kickoff, which Hertford County recovered and then ran out the clock.

Erion Holley rushed for 161 yards, part of 282 total yards by the Bears. Hertford County’s defense held the Panthers to 141 yards, only 62 of those yards through the air.

Hertford County is now 10-2 and awaited the winner of Oak Grove and North Davidson, who played a Friday game not completed by press time.

GATES – Ever since she took her maiden ride as a toddler all the way up to qualifying for the... read more