GATES – Ever since she took her maiden ride as a toddler all the way up to qualifying for the Olympic team, Emma Lane has had a way with horses.

And this fall, she will take her best ride to date. The Ridgecroft School senior celebrated National Signing Day by inking her National Letter of Intent to attend the University of South Carolina beginning next fall on an equestrian scholarship.

The four top college equestrian programs in the Southeast, SEC members all, were the Gamecocks, Georgia, Auburn, and Texas A&M.

“I chose South Carolina over Georgia because it’s closer to home and I can actually drive home and not have to fly,” she explained after her signing ceremony in Ridgecroft’s gym on Wednesday. 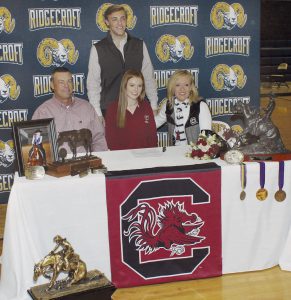 Surrounded by her horse-riding trophies and honors, Ridgecroft School’s Emma Lane (front, center) is joined by her father, Bundy, brother, Hunter, and mother, Marinda at her National Letter of Intent signing ceremony Wednesday at the school’s gym. Lane will attend the University of South Carolina as part of the equestrian team. Contributed Photo

Lane’s specialty is reining, a riding competition where riders guide their horses through a precise pattern of circles, spins, and stops with the horse willingly guided or controlled with little or no resistance. The Quarter horses she regularly rides are kept at her Gates County home where she practices and where her dad, Bundy, doubles as her coach.

“She comes across as this bubbly personality that’s not so serious, but once the lights come on, she flips the switch and becomes very determined and very competitive,” her father says. “She’ll work hard, work late, and do whatever it takes to be the best she can be.”

Three years ago, Lane won her first World Championship for ages 13-and-under in Fort Worth, Texas. Since then, she’s filled her saddlebags with more honors, accumulating over 100 championships. She’s traveled and showed not only in the United States but also in Switzerland this past July where she represented the United States on the Junior Olympic Team for a second straight time, competing with 14-to-18-year-old riders from all over the world.

“A lot of the girls who’ll be my teammates (at South Carolina), we grew up competing in shows together and I’m really close with them, so it’s going to be lots of fun,” she declared.

Lane hopes to major in business at USC, and later wants to blaze a new trail with a career in international real estate. She’s achieved one of the highest, if not ‘the highest’ Division-One scholarship at her high school.

“I hope I can bring more skill and everything to a college team,” she stated. “But I also know that I can and have to learn a lot being with those girls. Maybe that will translate into wins and championships.”

Lane knows a thing or two about competition on something other than the back of a horse. She’s a two-sport athlete at Ridgecroft and was voted All-Tarheel Independent Conference in Volleyball. Last season she made the league’s All-Tournament team, and is a past recipient of the school’s Raging Ram award. But Lane is equally very dedicated to her horse riding; so much so that she is known to come home after practice and unwind by riding her horses.

“I told her we would do whatever it takes for her to achieve her dream, and not hold her back,” said her mother, Marinda. “Wherever she ended up had to come from her heart and where she felt comfortable and be the best team player and help bring home a win.”

As a freshman, Lane knows climbing the participation ladder will be challenging, but doubt in her ability won’t be a burr under her saddle.

“Getting up a five a.m. for workouts is going to be a little rough, but I also think it’s going to be lots of fun,” she remarked. “When I graduate (from college), I’ll get a chance to ride with Dad again, and not have to rely on him to give me good horses.”

AHOSKIE – The Albemarle School from Elizabeth City claimed their first boy’s championship as they were victorious 74-65 Saturday in... read more