Only a fraction turned out for a Veterans Day luncheon and program here Monday at the Northampton County Cultural & Wellness Center, but all were in the hearts and minds of a capacity crowd seated in the banquet room of the facility.

The event was the brainchild of Northampton Commissioner Joyce Buffaloe. She formed a committee and the idea took shape for what turned out to be a five-hour program. 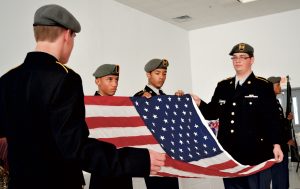 As part of Monday’s salute to Northampton County military veterans at a luncheon held at the Wellness Center, members of the NCHS Junior ROTC carefully fold the American Flag as it was “retired” following the event. Photo by Betty F. Jones

Britt, born and raised in Murfreesboro, joined the Navy in 1986 and retired in 2010. Britt remarked that his brother was instrumental in encouraging him to take this career path.

Britt thanked the Veterans of the past for paving the way as well as all other Veterans, including the ones present. He thanked the VFW members for all they have done. He spoke about homeless veterans.

He added that the government has finally acknowledged Agent Orange and are helping veterans affected by this deadly herbicide. Britt encouraged veterans to ask for help and seek the benefits due them.

Smith introduced his lifetime friend, Clarence “Country Cowboy” Mitchell Jr. He provided the entertainment, wowing the crowd with his remarkable singing skills and comedy, as well as an amazing impression of James Brown complete with an impressive “King of Soul’s” signature hairstyle wig. He had everyone in stitches with his two and a half marriages and his lyrical advice on how to keep your woman happy. 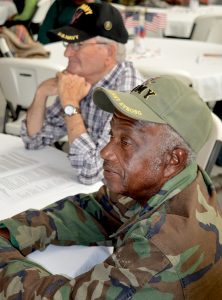 Northampton County is home to nearly 1,500 military Veterans, including these two who attended Monday’s event in Jackson. Photo by Danny Bowman Jr.

There were other military veterans taking part in the event.

Robert Wilkins, SPC (E5), U.S. Army, stressed the need and encouraged veterans, their families, and groups to apply for monies available for their benefit. He expressed there is a committee of 10 individuals in Jackson that could help with these needs. These dedicated committee members have had many years of experience doing just that.

Wilkins also indicated there was a resource table at the event that may have valuable information for someone in need. He stated the committee knew ways to get the job done quickly and efficiently due to the many hours spent lobbying for their veterans.

Joseph Flythe, Sgt. (E5) U.S. Army National Guard, led the recognition of the Veterans. Going around the room, the Veterans stated their name and rank.

Recognizing a few outstanding soldiers in attendance were Mr. Carver, who served in WWII, and Mr. Barnes was in the U.S. Navy. Also recognized were several Purple Heart recipients, including Johnny Nelson, U.S. Army Master Sgt. (Retired) with four such esteemed honors.

Also attending was prestigious Buffalo Soldier, Henry E. Wright, a Korean War Veteran, who authored the book, “My Life, My Story” detailing challenges he faced in his life, to include the fight for Civil Rights.

Wanda Flythe recited the Fallen Soldier Ceremony with an emotion filled voice and tear streaked face that most likely mirrored the pain and heartache of the families and loved ones of these fallen soldiers. The lonely small table with the empty place setting and single red rose each has various symbols to show the dignity and honor of this grave situation. The emptiness drives home the fact that it leaves a void in these families that can never be filled. Each item also symbolizes the torture of the ones at home waiting for the ones that will never come. The red rose symbolizes that these great soldiers gave the ultimate blood sacrifice so every one of us may enjoy the freedom we have today.

JROTC Cadet Kennedy explained the significance of each fold as other Cadets performed the folding and retirement of the flag in this flag ceremony. 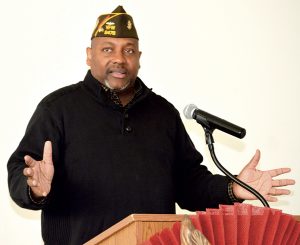 Smith thanked Commissioner Buffaloe for her hard work on the program. He let everyone know that it was her idea for it all to honor the Veterans.

Northampton Commissioner Kelvin Edwards, First Lieutenant, US Marines, gave the closing remarks, stating there are 1,435 Veterans in Northampton County today. He said, “these Veterans bravely served America for our freedom so please say thank you to a veteran today.”

Edwards also thanked Buffaloe and the committee for the program.

Buffaloe then gave gifts to recognize the oldest male and female veteran present. The veterans were presented a gift donated by Stanley Edwards at “check in” she stated.

Door prize drawings were held. The prizes were donated by Buffaloe’s sister, Pauline Deloatch, who handmade each item. Some of the prizes showed her talented skills in crocheting.

Chaplain Major, Rev. Joshua Pair (U.S. Army Retired) and co-pastor at Patillo Chapel Missionary Baptist Church gave the closing prayer. He shared a powerful prayer that eventually helped to make him a Major in the Army with everyone.

He said, “Oh, Lord as we fight for freedom this day, help us to choose your mighty way led by the love of country to fight any country, any foe at any time anywhere or wherever we may go. Train us hard for the battles we may face. Make our weapons instruments of grace. Steadfast and loyal we will fight to the end for all we hold sacred and a call to defend.”

AHOSKIE – Military veterans of all ages and branches of service gathered here Monday morning to celebrate their day, but... read more